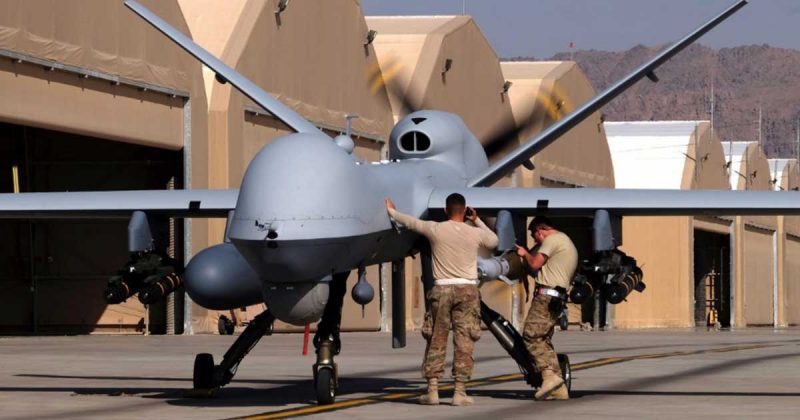 Drones, as a means of intelligence, surveillance and reconnaissance, have been used since the Vietnam war. In the aftermath of 9/11, the US military began using armed drones to target high-value Al Qaeda operatives and figures. In Pakistan, the notorious drone warfare, that led to friction between the United State and its ally in the war against terrorism, began when the U.S. Predator drone targeted Nek Mohammed in 2004.

Over the next 4 years of the Bush administration, a total of 48 drone strikes were carried out in tribal areas of Pakistan. Doubling down on the low-risk high return strategy, drone warfare became the cornerstone of the Obama administration’s counterterrorism strategy with a total of 353 strikes and somewhere between 1,934–3,094 casualties, both militants and innocent civilians, in the erstwhile FATA alone.

Since perception management is an integral facet of modern warfare, drones proved to be a perfect tool for warfighting on several accounts. First and foremost, it lessened the number of flags-wrapped coffins coming home, a PR nightmare in a country like the United States where people can hold those in power accountable. Secondly, the cost of operation drastically comes down when a machine operated thousands of miles away from a desert in Nevada can do the same job, with high precision and a third of the cost of a Delta Unit.

And lastly, the live visual transmission back to the command-and-control unit not only endorsed the success of the strike, but its utility to amplify the State narrative, more on this later, also grew rapidly. It was only a matter of time before the success of the US drones against the militants would seep into conventional wars.

The war in Yemen continues to have a significant impact on the long-established notions of war. In response to the continuous pounding of the Saudi jets, Houthi rebels have been using drones against Saudi strategic and economic installations. Over the course of the war, the Iranian-made drones used by Houthis along with their own innovations, have managed to stay relevant in a war where the gap between available resources to both sides is as wide as it could get.

Houthis have strategically used suicide drones against Patriot missile defense systems to improve the penetration of the missiles being fired at Saudi facilities. Furthermore, the interception of cheap drones via super expensive Patriot interceptor missiles has incurred an additional huge cost for Saudi Arabia. The strategic use of low-cost drones and makeshift missiles has been a cornerstone of the Houthi war strategy which has continued to pay dividends over the years.

The first instance of a large-scale deployment of armed drones in a conflict between national armies came in 2020 when Armenia and Azerbaijan went to war over the disputed Nagorno-Karabakh region. Turkey had successfully been using the Bayraktar TB2 drones against counterterrorism ops in Syria, and it became the drone of choice for Azerbaijan. As the conflict between Azerbaijan and Armenia progressed from rhetoric to active confrontation, Baku was extensively backed by Ankara both on diplomatic and military fronts. The military supply that came from Turkey included the TB2 drones.

Armed with MAM-L-type laser-guided missiles, the drones wreaked havoc on Armenian air defense and mechanized formations. The drone footage of missiles hitting the tanks went viral over the internet. On one hand, it was the source of chest-thumping for the people and government of Azerbaijan, while at the same time it was an impeccable marketing campaign globally for Turkish drones and other military equipment.

Nothing sells better than a battle-proven weapon

Ukraine war has been the latest avenue where drones are being used by both sides. And once again, the Turkish TB2 drones were phenomenal just as they have been in the Nagorno-Karabakh conflict. Ukraine has used the TB2 drones with tactical brilliance to destroy Russian tanks, artillery positions and troops. The reason Turkish armed drones are in high demand around the conflict region is because of their cheap price tag and good enough delivery as compared to exponentially expensive US drones. In response to Ukraine’s warfare, Russia has resorted to kamikaze drones it procured from Iran.

The Shahid-136 drones are used to target civilian infrastructure in major cities which are otherwise guarded with air defense systems. Since these drones are small enough, they managed to bypass radar detection and become very difficult to intercept. Many analysts have attributed the success of these drones to the war in Yemen that has continued since 2014. The active conflict provided Iran with a chance to improve the drones to such an extent that now Russia has reportedly procured them in thousands, a country that should be technologically superior to cash-strapped, sanctions-inflicted Iran.

Since 2014, drones have been used in various conflicts around the world from tactical to strategic levels and the scope of their operations during the conflicts would only increase in the future. They are increasingly becoming an important component of air and sea warfare. The AI-powered Swarm drones capable of autonomously identifying and engaging the target are the next step in this direction. As seen during Nagorno-Karabakh and Ukraine has already shown the vulnerability of traditional means of war, tanks and artillery, to armed drones. Hence it would be safe to assume that the future of warfare highly depends on the countries that have got high-spec armed drones of their own.