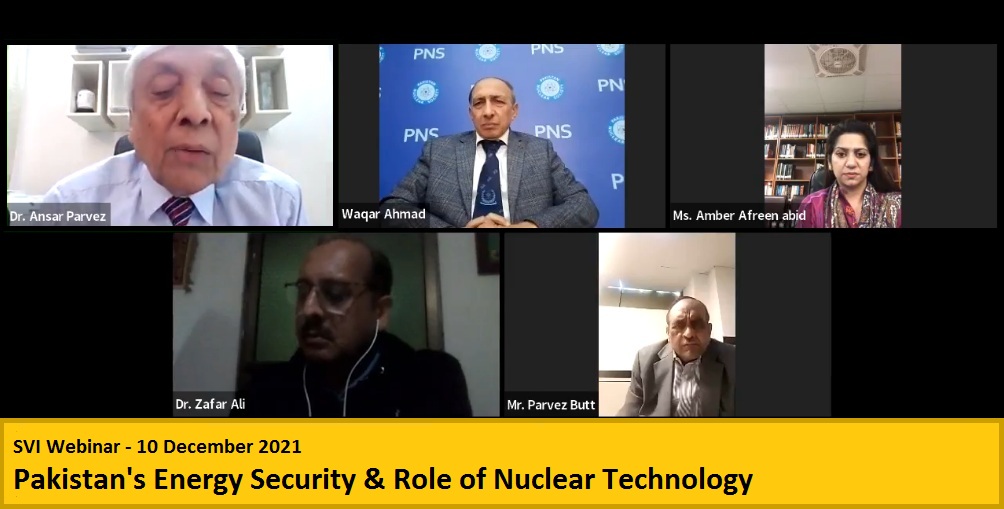 Islamabad – Pakistan’s top nuclear energy expert has called for prioritising nuclear energy in the power generation capacity expansion plans for reliably meeting the future load requirements. Adviser to the National Command Authority on Nuclear Power Dr Ansar Parvez, speaking at the Strategic Vision Institute’s (SVI) webinar on ‘Pakistan’s Energy Security & Role of Nuclear Technology’, said nuclear energy should continue to play an important role in the country’s energy mix as it is cheap, reliable, and has a higher productive capacity factor, the think tank said in a statement on Tuesday. Dr. Parvez suggested increasing the share of nuclear energy in the energy mix from the current 8 percent to at least 20 percent. His contention was that nuclear plants, unlike most of the other generation sources, are baseload plants, which produce electricity at a constant rate for meeting the continuous demand. “Once 20 percent of your capacity is on secure baseload, you can build as many of solar, wind, and hydel plants,” he maintained. Pakistan currently has an installed nuclear capacity of 2,490 MW, which would next year grow to 3,635 MW with the addition of 1,145 MW K-3 Plant. No further growth in this capacity is expected till 2030 as no other nuclear power plant is currently under construction. Dr Parvez emphasised the significance of energy planning saying it has a direct bearing on economic security, environmental security and national security.

Another expert Dr. Zafar Ali said Pakistan accords utmost importance to nuclear security and technology regulations as a national responsibility. Over the years, he said, Pakistan has established a comprehensive and effective national nuclear regulatory regime, which covers nuclear material and other radioactive materials and associated activities.

He said that the regulatory arrangements while preventing proliferation of weapons of mass destruction should not hamper international cooperation in the peaceful uses of technology. A non-discriminatory approach towards civilian nuclear cooperation, he advocated, will not only benefit the global non-proliferation regime but also help in achieving the UN sustainable goals.