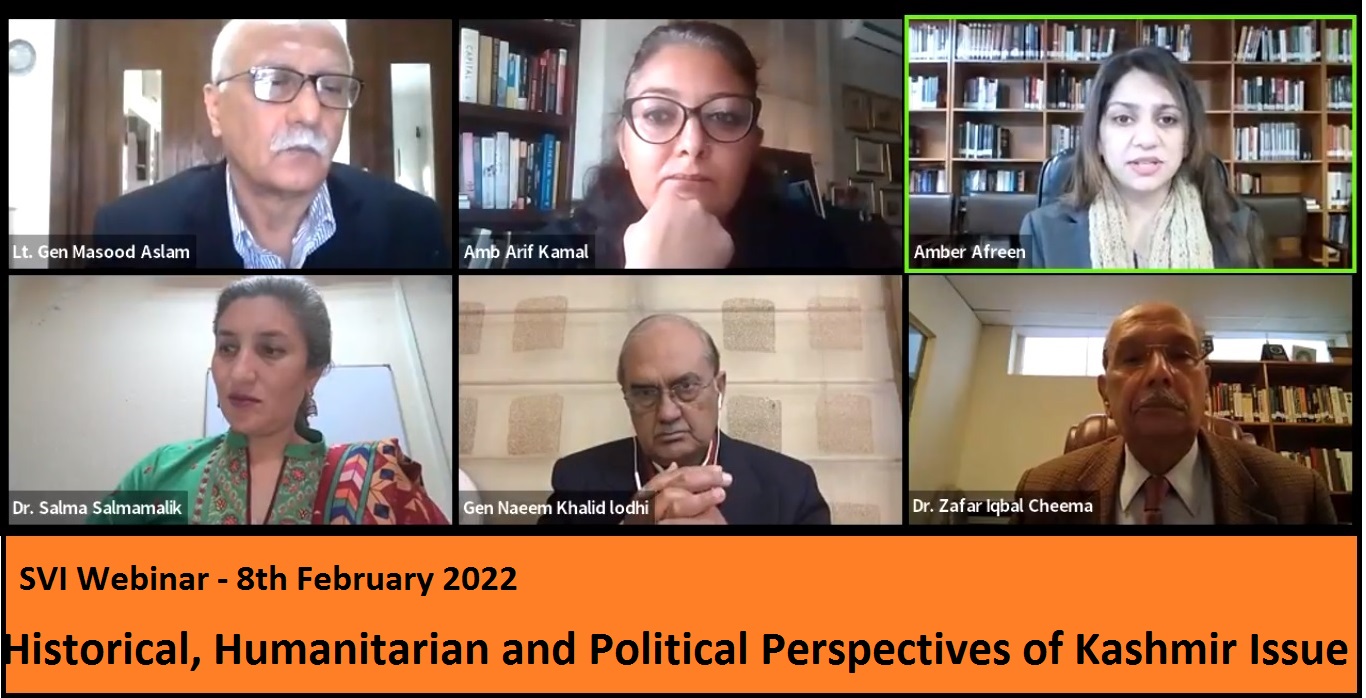 ISLAMABAD: Speakers at a webinar on Kashmir conflict called for taking a fresh look at the strategy for highlighting the dispute and the atrocities being perpetrated by the Indian troops in Occupied Kashmir.

The webinar on ‘Historical, Humanitarian and Political Perspectives of Kashmir Issue’ was hosted by Strategic Vision Institute (SVI), according to a statement issued by the think tank on Tuesday.

The participants of the discussion deliberated on the various aspects of the conflict and proposed ideas for advocating the cause more effectively.

There was generally a consensus among the speakers that the strategy for promoting the Kashmir cause needed to be rebooted in view of the recent Kashmir related developments and emerging challenges instead of hiding behind the excuse of India’s strong economic clout.

Lt. Gen. (R) Masood Aslam, in his opening remarks, regretted that the world appeared indifferent to the aggravating plight of Kashmiris as no action had been taken to compel India to stop the atrocities it has been perpetrating in Occupied Kashmir.

“We need to review our own efforts. Do we really have a plan, a blueprint with timelines about what we want to achieve? Who is coordinating these efforts in the government, civil society, academia, and the diaspora? Or is everybody doing it independently,” he emphasized.

In his view, Pakistan’s current strategy was not delivering the expected results, because Indian atrocities were continuing unabated and Indian narrative was getting more traction.

He questioned if China’s support had even been adequately utilized.

“There is no clear-cut policy or a blueprint available at the government level or even at a private level. The effort to galvanize the support of Kashmiri and Pakistani diaspora is limited,” he maintained adding that the national consensus on Kashmir too had not been fully exploited.

Gen. Aslam, therefore, proposed the use of civil society and social media for exposing Indian war crimes in Kashmir, human rights abuses, and subjugation of the Muslims.

Former Caretaker Defense Minister Lt. Gen. Naeem Khalid Lodhi noted that Pakistan’s strategy on Kashmir was reactive and he cited the example of Delhi’s unilateral actions of Aug. 5, 2019 about which little was done until they had been implemented though there were signs all along that it was about to happen.

He blamed “weak media” effort for the shortcoming of not having been able to connect with civil societies in other countries. Emphasizing the importance of civil society, he said, though foreign governments tend to overlook issues that do not align with their interests, but rights activists do take note of such things.

He suggested that Pakistan should lobby with the international community for a census in both parts of Kashmir because of the demographic change that BJP is bringing about in the Occupied Kashmir.

Dr. Salma Malik of Quaid-e-Azam University said that India amplifies its narrative by employing political economy as well as diplomacy.

Published in Pakistan Today on February 15, 2022