One Day Seminar: India-Pakistan Impasse and Implications for Regional Diplomacy/Strategic Stability & Three Years of SVI: A Commemoration on 27th January 2016 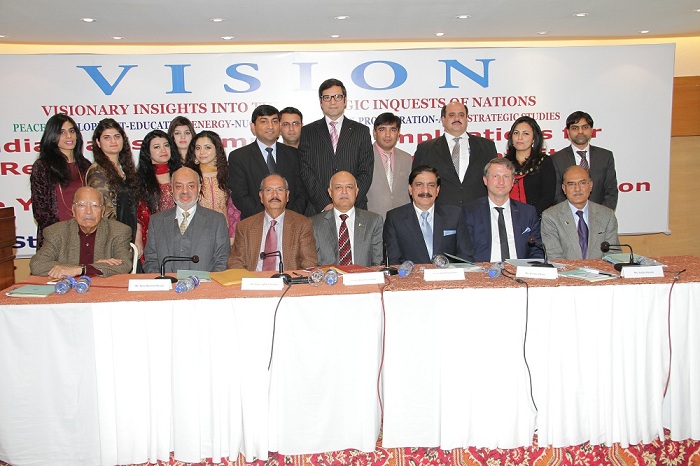 Strategic Vision Institute held a one-day seminar on “India-Pakistan Impasse and Implications for Regional Diplomacy/Strategic Stability” and utilized the occasion to officially launch its premier biannual journal, Journal of Security and Strategic Analyses (JSSA). The seminar was held on 27th January 2016 at Islamabad Club.

The seminar was attended by high profile political, diplomatic and military elites along with seasoned researchers and academicians. The deliberations they shared on the forum received extensive coverage not just in the local papers but were widely flashed across in the Indian print and electronic media as well. The Tribune, DECCAN Chronicle, The Statesman, IANS, newKerala.com, sify.com and other Indian websites and blogs published the news coverage specifically mentioning Defence Secretary and Chief Guest for the occasion Lt. Gen. Yasin Malik’s advice to exercise caution while pursuing relations with India. The Indian media highlighted his remarks where he cautioned that no radical shift in Indo-Pak ties was expected, although there could be minor improvement caused by expediencies of the international environment. He said that for Pakistan, “bending is not an option; either forward or backwards. We bend and we get a kick”. He also listed a number of measures he expected the government to undertake — both internally and externally — in order to effectively deal with the challenge posed by India: de-linking Pak-Afghan ties from the Pak-India relationship, safeguarding the China Pakistan Economic Corridor (CPEC) from sabotage, tackling political fissures over CPEC, pursuing water security more seriously, and appointing a full-time foreign minister. Retired Lt. Gen Naeem Lodhi, another former defence secretary, echoed Mr. Malik when he noted that there was no détente in sight. 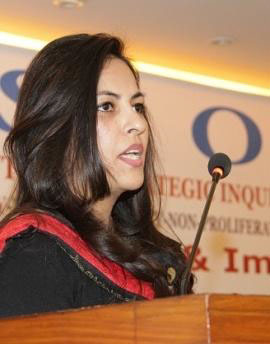 The proceedings of the first session looked at the three years performance of SVI since 2013. Ms Sadia Kazmi, Senior Research Associate SVI, gave a quick Introduction of the SVI and activities that it has been undertaking since its inception till date. She mentioned that the primary focus of the SVI is to provide a framework for professional expertise, doctrinal wisdom, and vision that is indispensable for decision-making and policy formulation. Talking about the major milestone, she mentioned the formal launching of the SVI premier bi-annual journal; Journal of Security and Strategic Analyses (JSSA) and expressed that in future the SVI is planning to further expand and explore into the fields of Strategic Communications, Informatics and Media Studies (Print and Electronic Media). 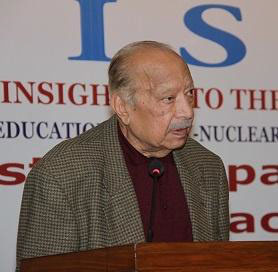 Mr. Ross Masood Husain, Chair Person SVI, shared his experiences, difficulties and troubles he faced back in 1973 when he embarked upon the task of setting up a think tank by the name of Strategic Studies. He acknowledged and commended Dr. Zafar Cheema (President/Executive Director SVI) for his dedication and hard work that went into the establishment and progress of the SVI. He also applauded the young and skillfully dynamic team of SVI, which has led this institution to achieve so much in such little time. He thanked Konrad Adenauer Stiftung (KAS) and appreciated the collaboration of SVI with KAS and how they have been mutually collaborating with each other for the last three years. 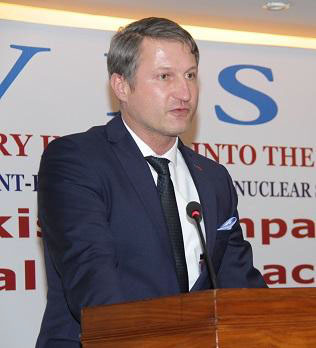 Mr. Ronny Heine, Resident Representative KAS, congratulated Mr. Ross and Dr Cheema on completing the three years’ milestone. He revisited the three years’ collaborative journey of KAS with SVI and was glad that he was part of such dynamic and young team of scholars. He also highlighted about various seminars and conferences that both SVI and KAS have been conducting in collaboration for past three years. He emphasized upon the vital geostrategic location of Pakistan which lies at the crossroads of Middle East, Central Asia and China, along with vast untapped resources and large population, that not only makes Pakistan a significant player in the region but also imperative for KAS as well to invest and explore into, through research and development avenues. 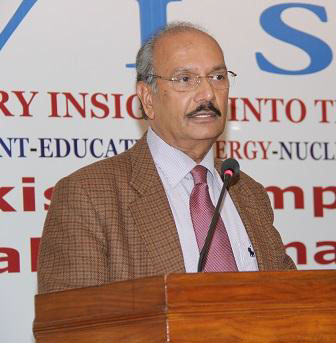 Dr Zafar Iqbal Cheema, President/ Chief Executive SVI welcomed and offered his thanks to the worthy guests and Excellencies for affording time to commemorate the completion of three years of the SVI. He expressed his pleasure that just like today Lt. Gen Asif Yasin Malik was the Chief Guest for the Inaugural Conference of the Institute back in 2013. He thanked him for his continued support and association with the SVI. 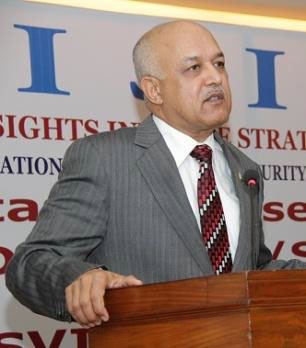 Lt Gen (Retd) Asif Yasin Malik speaking on the occasion advised extreme caution to the government while pursuing relations with India, while reiterating that “bending is not an option; either forward or backwards. We bend and we get a kick”. He also congratulated Dr Cheema and Mr Ross on completing the three year milestone. He appreciated the fact that the SVI has adopted a compact and comprehensive multidisciplinary agenda. He was also cognizant of the fact that the SVI has been working hard to make its mark in the large pool of existing think tanks in Islamabad, by projecting positive image of Pakistan and useful narratives at the international level through regular seminars and conferences. He also encouraged and recommended the non-governmental organizations and the civil society to work hand in hand with think tanks like SVI to project a better vision and create awareness for people of Pakistan. He advised the Ministry of Defense to take up initiatives to incorporate the think tanks for better policy formulation.

Lt Gen. (Retd) Syed Muhammad Owais, Secretary Ministry of Defence Production, gave a detailed history of the SVI mentioning its contributions in the form of regular publications, conferences, In-House seminars, reports, and Journals. He elaborated that the SVI stands for prudence in dealing with national and international issues, 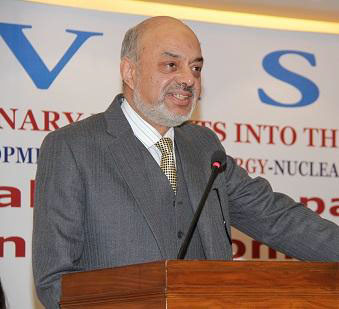 something that can be fostered through scholarly inquest, professional analyses and by planning prudent policy alternatives. The fact that the SVI was able to hold its inaugural conference in just three months of its inception in April 2013 was considered extremely creditable for its entire team led by Dr. Zafar Iqbal Cheema as its President & Executive Director and Mr. Ross Masood Hussain as its Chairperson. It is considered imperative to develop collective, multi-institutional and pluralistic decision-making by creating sync among the political, military and diplomatic decision-making echelons with assistance from the academia, and media and policy professionals, which he believed that the SVI is successfully contributing to.

Dr Shahid Hussain Bukhari while talking about the basic responsibilities of a think tank, mentioned that it should ideally analyze policies, provide forums for discussions on national and international issues, generate and promote 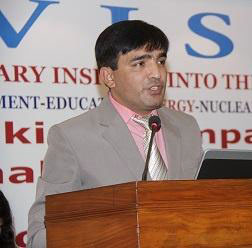 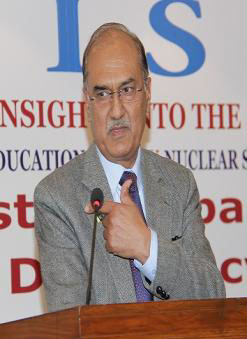 Lt Gen (Retd) Naeem Lodhi endorsed Lt. Gen. Yasin Malik’s views on IndoPak relations and said that the answer lies in the leadership of both countries ending the “blame game” and approaching the relationship with fresh and open minds. He further said that the imbalance of size and political clout is highly in favor of India and begs third party facilitation to veer these two nuclear powers away from confrontational mode as there seems to be no other option.” He also talked about his association with the SVI from past to present. He said that the secret behind SVI’s success is the hard work by its skilled members, the excellent networking that is important to reach out to the vast audience and lastly the excelled leadership.

Dr. Zafar Nawaz Jaspal gave his observations and views on the three years of the SVI by 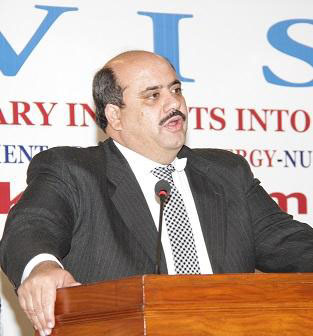 equating its academic activities with knowledge and power. He categorically mentioned that the SVI is the only think tank that is contributing to the narrative development, which is not only being projected nationwide but is being duly noticed at the international front. For instance, SVI held a timely conference when PM Nawaz visited India to attend PM Modi’s oath taking ceremony. While it prompted optimism and pragmatism in Pakistan, the SVI critically analyzed the whole situation and drew logical conclusions suggesting that strategy of appeasement would not serve Pakistan well. He further said that the SVI is the only Institute which through its In-house seminars and subsequent documents and reports, established a strong response to the report presented by US’ state-departmentfunded think tank about Normal Nuclear Pakistan. The proceedings of the SVI seminar were brought out in public and were followed by successive documents that essentially exposed biases in the report. He openly stated that while the government funded think tanks in Pakistan were giving space to something that was not acceptable, SVI was the only institute that brought a timely counter narrative which not only prevailed but also changed the Western mindset. Similarly, the SVI published a book in 2013, which reflects upon the future construct of international politics. These perspectives published in the book are in harmony with the national interest of Pakistan. He further stated that the most recent achievement of the SVI is its premier bi-annual journal (JSSA), which is being launched today after a three year long struggle and can be compared to any good academic journal. 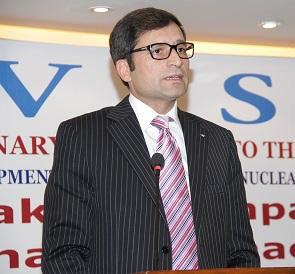 Dr. Hussain Shaheed Suharward talked about “The Pakistani Dream” which became the reason behind the creation of Pakistan. He enlisted various problems which Pakistan needs to overcome to be recognized as a developed country not only in South Asia but also globally. He emphasized on the need for developing human and social capital, institutional reforms, modernization of public sector and food and energy security.

In the end, Dr. Cheema once again extended his gratitude to all the speakers and the audience. 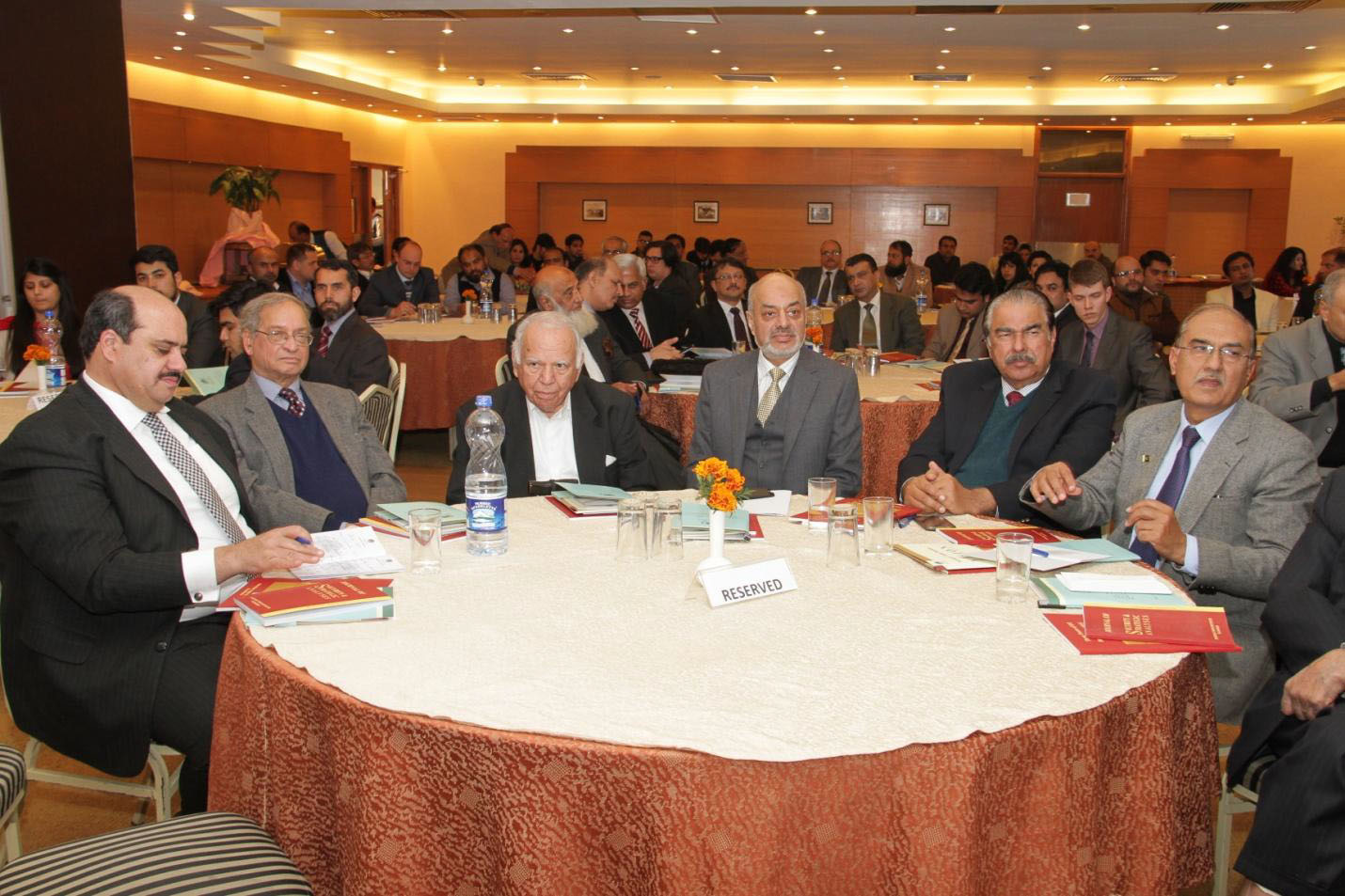