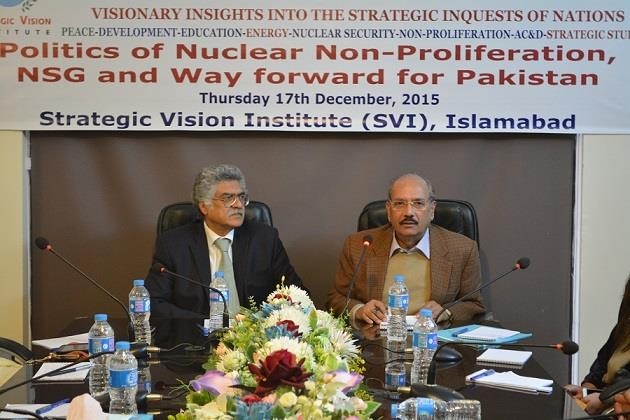 The discussion was chaired by Dr. Zafar Iqbal Cheema, President/Executive Director of the SVI. He thanked Ambassador Zamir Akram for affording valuable time out of his busy schedule for speaking on a key national security and non-proliferation issue. Dr. Zafar Iqbal Cheema welcomed the worthy speaker and participants for gracing the occasion with their presence. Dr. Cheema introduced the topic by saying that the nature and character of the on-proliferation regime (NPR) has been altered from its original visualization due to the Western nuclear weapon states (NWS), especially United States’ discriminatory use of the NPR as an instrument of its foreign and strategic policy objectives like the Indo-US Nuclear Deal. India is being propped up as a “pivot” of the U.S. Asia-Pacific strategy, assisted to become a rival great-power to China and now being hectically supported to become a full member of the Nuclear Supplier Group (NSG). Therefore, it is imperative to deliberate on the prospects of India’s inclusion in NSG and the options and way forward for Pakistan in the face of such currently prevailing challenges. 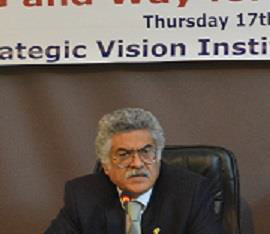 Ambassador Zamir Akram commenced his address by talking about the Conference on Disarmament (CD) architecture. He opined that CD has failed to realize its assigned objectives due to divergent priorities of member states and lack of unanimity that is an essential requirement of its decision-making procedure. While presenting an overview on NonProliferation Treaty (NPT), NPR and the NSG, he said that the world has far less nuclear weapon states than was once feared, probably because of the non-proliferation regime, but still proliferation is taking place. The nuclear powers who are telling others to stop making nuclear weapons are vertically proliferating either in qualitative, quantitative or in both terms. He stated that the outcomes of NPT Review Conferences had disappointed all those who supported disarmament and nonproliferation, and it was a setback to both Nuclear Weapon States (NWS) and NonNuclear Weapon States (NNWS) that had projected this flawed and discriminatory treaty as the key component of the nonproliferation regime. This is why the alleged rogue states such as Iran (despite signing the NPT) and North Korea (withdrew after signing NPT) are still being considered as serious international security concerns. The discriminatory nature of the NPR convinced Pakistan and India not to sign NPT and when India carried out tests in 1974, Pakistan’s reservations were further validated. He recounted that it was not Pakistan but the major Western powers who obstructed progress on nuclear disarmament. At the CD, the Western countries misconstrued Pakistan’s justified national security concerns with an intention to distract the world from their own reluctance to make any meaningful move towards fulfilling their disarmament obligations.

He further maintained that nuclear disarmament is a desirable goal but the realistic approach towards the achievement of this goal requires the policy makers to consider national security of states without being discriminatory towards or against any specific country. Unless the security interests of countries are not catered for, the efforts towards disarmament will not deliver. He stressed that without P5 engaging for this effort, CD cannot yield any results. He expressed his disappointment about the functioning of NPR by saying “the non-proliferation regime is like a chain smoker telling everyone to give up smoking”.

He expressed concerns that all the states that are party to the NPT are not allowed to transfer nuclear technology either for civilian or military purposes to any state that is not party to the NPT (Article-I). However, India-US nuclear deal provides assistance to a kind of vertical proliferation of Indian nuclear weapons by violating Article-I, hence, it is in stark contradiction to the principles of NPT. The US signed civil nuclear deal with India proclaiming that ‘India’s non-proliferation credentials were impeccable when in reality India had been subjected to sanctions many times by the US itself’. The hypocrisy is evident; this is the clear case of misleading international community.

Amb. Zamir highlighted that NSG is now confronted with a very critical issue where the US and all major powers are generating tremendous pressure in favoring India’s membership to NSG with China being an exception. This according to him is ironic since it was India whose 1974 nuclear test led to the creation of the NSG. The basic purpose of the NSG is to provide a mechanism through which the non-proliferation goal could be achieved, but in the present scenario the group members are unanimously supporting a proliferator (India) to be part of the group. He further elaborated on why did it happen? He opined that the special favors to India are being given because of dynamic international strategic environment. United States wants to be the sole power, where specifically since 1990s, its security doctrine is largely driven by the need to avoid and curb the emergence of any competitor. In this regard China is being viewed as the most probable contender having the potential to challenge US’ claim to being a sole super power. Hence the policy adopted by the US is to contain China’s rise. To pursue this objective the linkages around the world are being created with the prime aim to encircle China to prevent its emergence as a global player. Hence as per US’ strategic thinking, India has a substantial role to play in the containment of China and is seen as most deserving for the NSG full membership. However he reiterated that this approach is highly non-sensical on the logical grounds where other states are intentionally being marginalized in lieu of US’ selfish interests.

He stressed that Pakistan committed a grave mistake by not opposing this initiative back then where it should have opposed special waiver to India. Once again Pakistan is being expected to adjust to India’s formal membership to the group despite the fact that India does not meet any of the criteria for NSG membership. At the same time this fact is intentionally being ignored by the West that materialization of India’s NSG full membership is highly detrimental to Pakistan’s security future. He suggested that in the forthcoming twenty-fifth plenary meeting of the NSG, Pakistan should not repeat the same mistake and should stand firm on its stance to either have this membership simultaneously granted to Pakistan also or otherwise not be given to India only.

He expressed apprehensions that Pakistan is not only being pressurized to cap its nuclear weapon capability but is also being denied a space to present rationale on its need for nuclear deterrence as a core of its national security. Conversely, India is being given an opportunity to expand its conventional and strategic capabilities. He stated that India’s recent increase in their defense budget is already larger than Pakistan’s total defence budget. Apart from conventional build up India has already acquired a triad of delivery systems which include air, land and seabased nuclear capable medium and long range missiles. India already has one nuclear submarine while more are on the way. Simultaneously it is also in the process of developing Ballistic Missile Defense (BMD). Moreover, there are prospects of India’s ‘top secret’ project of building a nuclear city to produce thermonuclear weapons that could exponentially elevate India as a nuclear great-power and further unsettle Pakistan.

Deliberating upon the Western proposals to shift back from ‘full spectrum’ to strategic deterrence’ and limit the production of short range delivery vehicles and tactical nuclear weapons, Amb. Zamir rejected the unfounded concerns of the Western think tanks about Pakistan’s Full-Spectrum Deterrence, saying it can be achieved at the minimum level and there was no contradiction between the two concepts. He was of the opinion that after India adopted ‘Cold Start Doctrine’, Pakistan was left with the option of either matching India’s defense expenditure or opting for the cost-effective tactical weapons and this (strategy of developing short range missiles) has worked for Pakistan in deterring India’s aggressive designs, thus Pakistan should reject Western pressure in this regard. He maintained that the West does not want us to develop tactical weapons even though India too possesses tactical weapons. On safety and security of Pakistan’s nuclear program, he said that our safety and security measures are highly appreciated internationally especially for establishing Pakistan Centre of Excellence for Nuclear Security (PCENS) in Chakri.

The former envoy said that it is evident that the West has been particularly biased against the Pakistani program. The visits by the US President’s Advisor Peter Lavoy, with proposals to restrict Pakistan’s nuclear program, the reports by the Western think-tanks, Stimson Center and Carnegie Endowment for International Peace, and the strongly worded editorials by New York Times (NYT) against Pakistan’s nuclear program, all hint at their prejudiced disposition adopted against Pakistan. He said that it will be an idiocy to think that all this is happening without any coordination. It is not an isolated or random activity but is a part of an orchestrated campaign launched by the non-proliferation regime, India and the Jewish lobby.

Talking about Pakistan’s apparent inability to respond in a timely manner, he dispelled the misconception by saying that despite Pakistan’s firm disapproval to the special favors to India time and again, the US and Western lobby has intentionally not given any weightage to Pakistan’s viewpoint. Pakistan is deliberately being denied its right to project its policy in the West where even the letters to the editors of NYT and Washington Post have not been published. He said that muting Pakistan’s voice is a deliberate attack and to counter this approach Pakistan should work more stringently towards redefining its policies and making international community realize Pakistan’s genuine security concerns. He said that Pakistan can survive without NSG membership but it is necessary for Pakistan to be acknowledged, accepted and treated as a nuclear weapon state by the international community.

Amb. (R) Zamir Akram concluded his address with an important recommendation that Pakistan can counter Western pressure on its nuclear program by leveraging its strategic importance for the West in the context of its counter-terrorism efforts. He advised that Pakistan should categorically tell the Western countries that it cannot cap its strategic program.

President SVI Dr Zafar Iqbal Cheema reinforced Amb. Zamir Akram’s opinion and said it was absurd to ask Pakistan to revert from full-spectrum deterrence to strategic deterrence and to expect Pakistan to unilaterally sign the CTBT especially when the US itself has not ratified the said treaty. He said that there is a need for a coordinated response by the private as well as government thinktanks to such Western biases and the response should further be projected at the international level. The SVI so far in a very short time span of three years since its inception has been able to give quite an impressive performance where its counter narratives have been registered and responded to by the Western think tanks.

The In-House Seminar was attended by members of academia, think tank representatives, retired Generals and ambassadors, media personals and students of various local universities. An interactive and stimulating question and answer session and debate on the issues discussed followed Amb. Akram’s address.

Dr. Zafar Iqbal Cheema concluded the In-House Seminar by profoundly thanking the august audience and mentioned that their presence made this seminar a successful endeavor. He offered special thanks to the guest speaker and expressed his appreciation to all the guests for actively participating and making the discussion interactive. He also extended his gratitude to the research and secretarial staff of the SVI for their hard work. The worthy guest speaker was presented a souvenir by the President SVI at the end of the event.