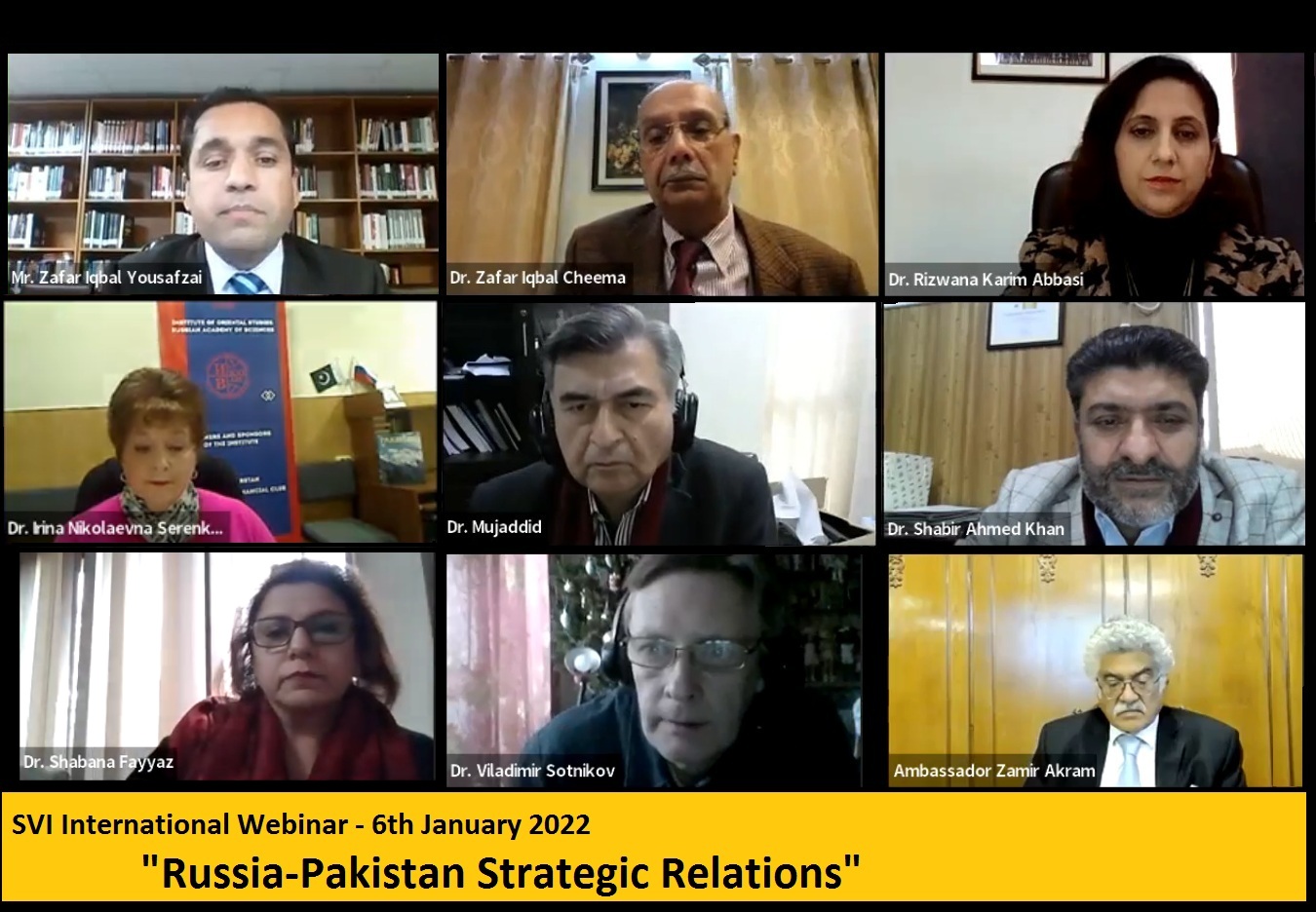 ISLAMABAD – Pakistani and Russian experts believe that enhanced economic cooperation between Islamabad and Moscow can lay the foundation for a robust strategic engagement between the two countries without being affected by the Indian factor.

These views were expressed at a webinar hosted by Strategic Vision Institute on Monday on ‘Pakistan-Russia Strategic Relation’ in which scholars and practitioners from both countries analysed the current state of the relationship and prospects of forging a strategic partnership.

Some experts feared that Pakistan may have been not too good in benefitting from the positive trends in the ties.

Zamir Akram noted the existence of “convergence of strategic interests” between the two countries on peace and stability in Afghanistan, countering terrorism, and regional connectivity. He urged the government to engage Russian government and businesses in large scale projects in the country.

“The lack of progress has been mainly due to Pakistan’s own faults rather than any failings on the Russian side,” he observed while referring to Islamabad not having been able to benefit from Moscow’s interest in the privatisation of Pakistan Steel Mills.

His views were shared by Dr Rizwana Abbasi, who teaches at National University of Modern Languages. She said that Russia’s S-400 missile system’s sales to India should not hinder progress in Moscow–Islamabad ties.

“Pakistan can involve Russia and China along with US on a holding constructive dialogue on arms control arrangements and arms control mechanisms,” she suggested adding that Russia was a potential contender for a role for resumption of dialogue between India and Pakistan on Kashmir dispute and checking the aggravation in the regional balance.

Russian scholar Dr Irina Nikolaevna Serenko said nascent Pakistan-Russia defence ties can grow with time, but the two needed to build the relationship through economic cooperation particularly the conclusion of the agreement for the construction of the 1100km gas pipeline called the Pak-Stream Gas Pipeline.

She said Russian President Putin could have visited Islamabad last month as well when he went to India if there could have been a substantive outcome like the gas pipeline deal. She said, “There was no big agenda for Putin to visit Pakistan” because of slow progress on gas pipeline.

She said that Moscow’s foreign policy approach was to simultaneously develop ties with both India and Pakistan as illustrated by Russian Foreign Minister Lavrov’s visits to both countries last year.

Dr Vladimir Sotnikov of Russian International Affairs Council said economic cooperation formed the most prospective area for developing convergences between Pakistan and Russia. “I think that the very attractive area of enhancing cooperation between Russian Federation and Islamic Republic of Pakistan is the economic area because we have a lot of to share. First of all enhance the trade relations and supply from Russia heavy machinery,” he said adding that subsequently the two can move towards civilian nuclear cooperation.

Executive Director SVI Dr Zafar Iqbal Cheema said that despite significant progress in diplomatic ties, the economic relations still had to be improved.

He hoped that economic ties would soon reach the desirable level because of “warm political and diplomatic relations”.