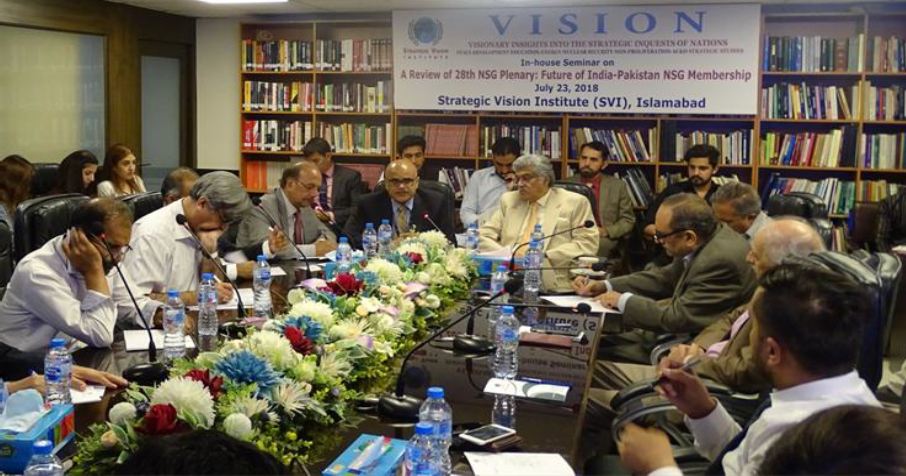 Dr. Zafar Iqbal Cheema (President/Executive Director SVI) formally inaugurated the session
with a warm welcome to the participants and expressed gratitude for their attendance. In his introductory remarks, Dr. Zafar Iqbal Cheema stated that during the 28th NSG plenary meeting, the India-Pakistan membership case did not get much attention unlike previous years perhaps due to following two reasons: first, the NSG Plenary was dominated by North Korea’s nuclear test and its impact on nonproliferation regime; second, Iran’s nuclear issue and unilateral withdrawal of the US from JCPOA. Dr. Cheema mentioned that at the time of nuclear test by India in 1998, George Perkovich stated that the blasts have shaken the foundations of the international nonproliferation system. But the international community is now intentionally turning a blind eye
to India’s nuclear objective and the American lobby is instead focusing on Pakistan. Therefore in the emerging scenario, it is difficult to find out American’s stance on North Korea’s nuclear and ballistic missile tests. In this regard a question arises that whether the nuclear tests of North Korea would take attention away from Pakistan and North Korea will become the focus of American nuclear lobby or not. It is important to find out whether Pakistan will get some relaxation or it will remain the focus of American propaganda. In this regard the nuclear politics of NSG is a significant issue and it is important to find suitable policy alternatives for generating a viable international support by Pakistan for its membership of the NSG.
Dr. Cheema further introduced the second topic of discussion entitled “Pakistan’s Launch of Remote Sensing Satellites: Implication and Prospects”. He stated that Pakistan’s launch of Remote Sensing Satellite-1 (PRSS-1) and Technology Evaluation Satellite-1A (PakTES-1A) is a major milestone achieved by Pakistan. With this brief introduction of the topics Dr. Zafar Iqbal Cheema handed over the session to first speaker Mr. Muhammad Kamran Akhtar.

After the first round of discussion, Dr. Zafar Iqbal Cheema opened the floor for Question & Answer session.

Ms. Rubina Waseem, Lecturer at National Defence University, referring to Mr. Akhtar’s talk asked that although Pakistan stands for criteria based approach, it is still not clear as to how Pakistan’s diplomacy is working in that regard. Does Pakistan want India not to get the membership or is Pakistan pursuing its own case to get into the Nuclear Suppliers Group. Both approaches require different set of arguments. So, what is the proposed strategy of Pakistan on NSG membership with regards to India-Pakistan case? Dr. Cheema added to the question that although it is clear that International Relations do not work on criteria based approaches instead they work on politics of give and take. Pakistan’s demand for criteria based approach is an idealist view of International Relations. He further expressed his disagreement with Ambassador Zamir Akram’s point of view that Pakistan doesn’t have geo-political relevance in new international relations setup. He asserted that Pakistan may not have significance for the US and its allies but its geo-strategic importance for Russia and Central Asia cannot be ignored. He asked how wise it is that Pakistan should only continue to rely on China? Dr. Cheema added that political objective is to get the membership of NSG, the purpose is not to keep India out of NSG. So how Pakistan should deal with these matters? Mr. Muhammad Kamran Akhtar responded that there are several loopholes in India’s commitments to safeguard agreement and if Pakistan plugs in those loopholes then it will create a lot of problems for India. On the other hand, Pakistan is already fulfilling the IAEA’s commitments and willing to do so in the future as well. As per the IAEA regulations the states are asked to keep all the civil nuclear facilities under the IAEA’s safeguard. Pakistan doesn’t have any problem with these commitments as its power generation nuclear reactors are already under the IAEA safeguard while India has 8 nuclear power reactors outside the IAEA’s safeguards. These reactors are connected to the grid and do not produce the weapon grade Plutonium. So, by meeting the higher criteria regarding non-proliferation it would be India that will face the difficulties not Pakistan. Secondly, India refused to sign the CTBT in General Assembly. This shows that a lot of loopholes exist in India’s credentials and Pakistan should not be afraid especially in view of its own strong commitments and actions. Furthermore, Mr. Akhtar agreed with Dr. Cheema’s position on international politics and maintained that Pakistan has to be realistic about international politics that India’s political clout is very strong. But it is important to mention that despite India having extensive support and political lobbying Pakistan has pursued “criteria based approach” successfully and created problems for India. That is a successful example of diplomacy on part of Pakistan. He added that he doesn’t foresee any change in China’s position on NSG but still Pakistan should be prepared for any kind of eventuality.

Col. Muhammad Hanif, Senior Research Fellow, SVI, stated that while the US is enthusiastic about India’s NSG membership, on the other hand India is still pursuing its trade and economic ties with Iran and China. In this regard he asked what will be the implications of these strategies on India-US ties and how it would affect the US enthusiasm over India’s NSG membership case? Ambassador Akram responded that little tension between India and the US occurred on the issue of India’s import of oil from Iran but for the US it is a meager issue. Strategic requirement to be a partner with India in order to counter China is a more significant issue for the US. This factor is unlikely to change in a foreseeable future as relationship between the US and China grows more and more confrontational. Therefore, this minor issue will not reduce the strategic significance of India for the US.

Second Round of Discussion

After the talk, the floor was again opened for Q&A session which led to a very interactive discussion.

Dr. Ghulam Mujaddid, Dean Department of Aerospace Sciences And Strategic Studies, Air University, added that one satellite is not enough to cover the whole area. Pakistan must also have the multispectral apparatus that can view things on sea and land surface as well as in the atmosphere. For that purpose, various operative systems, x-rays technology, infrared, and optical cameras are needed. The positive part is that all these things have been realized and Pakistan has launched its own remote sensing satellites. This is a much elaborated and comprehensive undertaking by Pakistan that was highly needed. He added that relationship of India’s space program and strategic stability is a very important issue which needs to be discussed. Dr.Ghulam Mujaddid further said that it is unfortunate that SUPARCO is the least explored dimension in Pakistan.
Dr. Zafar Iqbal Cheema, President/ Executive Director SVI asked whether these satellites help Pakistan in anyway to have military information in battle field and in command and control? Dr.TughralYamin replied that these satellites would indeed be helpful for military purposes and in finding out weather conditions and can also be used for the maintenance of military equipment. Dr. Ghulam Mujadid added that space technology is significant for all aspects of military operations including development and maintenance. It could be very helpful for military, intelligence and surveillance applications.

Mr. Muhammad Ali, Senior Research Fellow at the Centre for International Strategic Studies (CISS), added that the international commercial industry is playing an important role in space technology. He stated that space technology can be related to the MTCR politics. Some countries such as China and Kazakhstan which are offering economically competitive rates for commercial launching of satellites are actually the competitor of the US. States may offer more advanced technology on more expensive rates but they have multiple options foracquiring the satellite technology. This could be the reason as to why the US is against China’s MTCR membership as being an MTCR member China will get access to more advance technology to buildup sophisticated satellites and space program. Such developments are not without strategic and commercial implications.
In the end Dr. Zafar IqbalCheema, President/Executive Director SVI, offered his deepest thanks to the participants and the worthy speakers for their active participation in the discussion.

Media Coverage:
Media covered the proceedings of the In-house seminar as is evident from the following links: