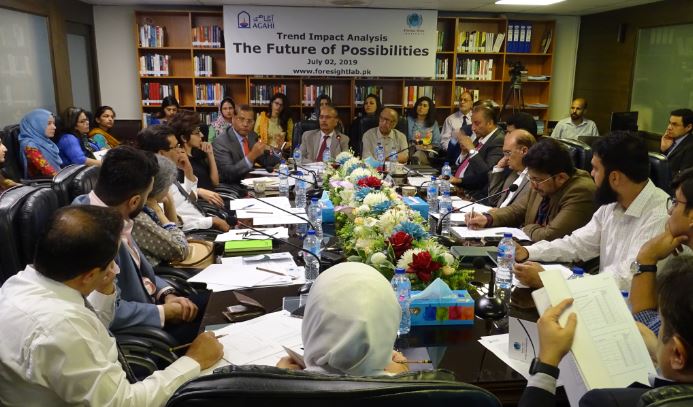 A brainstorming session on Trend Impact Analysis (TIA) – Pakistan State of Future Index (PK-SOFI) ‘The Future of Possibilities’ was held at the Strategic Vision Institute (SVI) in collaboration with AGAHI in Islamabad.

SVI President and Executive Director Dr Zafar Iqbal Cheema initiated the session, outlined the purpose of the conversation, which was to identify plausible future development that would have an impact on the wellbeing of the people of Pakistan.

The Trend Impact Analysis is a continuation of modeling the State of the future of Pakistan; an inaugural report that was published in October, 2017 by the Foresight Lab. AGAHI Foresight Lab Founder and President Puruesh Chaudhary expressed that if we are unable to imagine possibilities, we will remain stuck in the past, with a rhetoric useless for our future generations.

Pakistan State of Future Index ‘Anticipating 2027’ indicated a promising future for Pakistan. The report was the first of its kind to be published, developing foresight for evidence-based policymaking; it analysed the historical data of selected variables for the previous 20 years, projection of variables for next 10 years defining the best and worst plausible values for each variable.