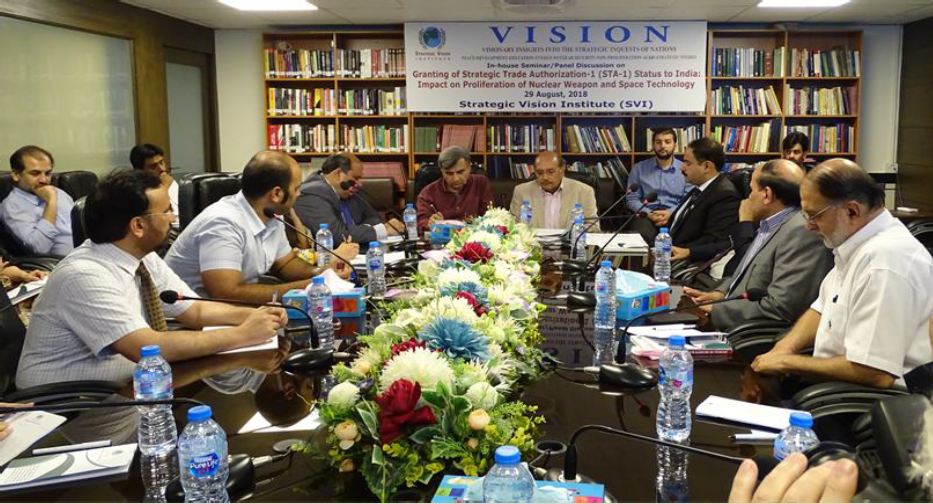 ISLAMABAD, September 3, 2018: Strategic Vision Institute (SVI) on Tuesday warned of implications of Strategic Trade Authorization-1 (STA-1) status given to India by the United States saying Washington was undermining regional stability and the global non-proliferation regime by doing so.

In a statement issued on the eve of the visit of Secretary of State Mike Pompeo to Islamabad, the think tank that specializes in strategic stability issues said: “The US tilt towards India for its geo-political goals, including containment of China, marked a paradigm shift in the American non-proliferation policy”.

US Department of Commerce had on July 30 granted STA-1 status to India. This allows license exceptions for export of certain critical dual use defense related and military technologies to India from the US. The US move had preceded the initiation of India-US 2+2 dialogue involving their foreign and defense ministers for which Secretary Pompeo will visit Delhi after completing his Islamabad trip.

President SVI Dr Zafar Iqbal Cheema recalled that this status is normally granted by US to a country, which is a member of all four export control regimes – Wassenaar Arrangement, Australia Group, Missile Technology Control Regime and Nuclear Suppliers Group (NSG). Trump Administration, he noted, again made an exception for India by giving the status to it although it is still not a member of NSG.

US, it should be recalled, had backed India’s entry into Wassenaar Arrangement, Australia Group, and Missile Technology Control Regime and had helped it earn a waiver from NSG in 2008. India’s membership of NSG has been held up because of differences among the members over admission criteria for non-NPT states.

Cautioning about the implications of STA-1 status, Dr Cheema said it would accelerate sale of critical equipment that can be used for military purposes particularly Electromagnetic Aircraft Launch System, armed version of Guardian Drones, and NASAMS-II, which is a multi-tiered air defense network featuring 3D mobile surveillance radars and missile launchers. He maintained that India would be able to get communications and security equipment circumventing COMCASA – a legal framework for the transfer of communication security equipment from the US to India – over which India had reservations.

Earlier SVI had held an in-house roundtable on the implications of STA-1.

Speaking at the roundtable Dr Zafar Nawaz Jaspal, a defense academic, said: “STA-1 will legitimize India’s right to acquire technologies for boosting its peaceful nuclear program as well as enhancing their weapons program.”

Dr Ghulam Mujadid Mirza observed that while India and US had been cooperating in the domain in space for few decades now, but STA-1 would “further boost the high-tech space, military, strategic, and commercial trade transfers”. He warned that STA-1 could de-stabilize the regional power balance and intensify arms race in the region.

Media Coverage
Proceedings of the seminar were widely covered by the print media, the details of which are given below: