Romanian Presidency of EUC: Mission and Priorities of the Romanian Mandate 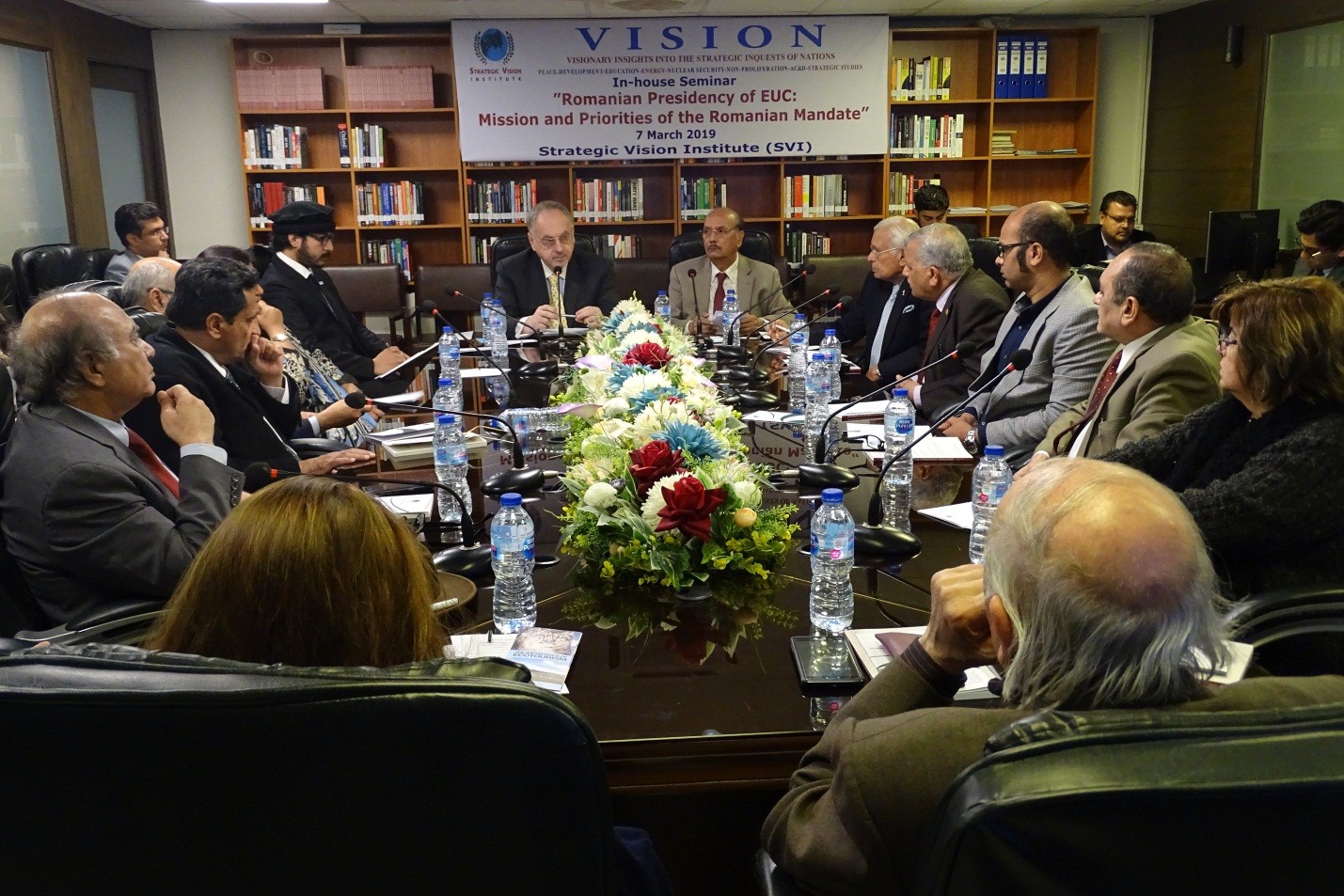 EU for ‘constructive and open’ dialogue between Pakistan and India

ISLAMABAD, March 8, 2019: European Union is close to finalizing the ‘Strategic Engagement Plan’ with Pakistan and the 28 member bloc would also strive for a “constructive and open” engagement between Islamabad and Delhi.

This was stated by Romania’s Ambassador Nicolae GOIA, whose country currently holds the rotating presidency of the Council of the European Union, while speaking at a round table discussion on “Romanian Presidency and Prospects for EU-Pakistan Cooperation” at Strategic Vision Institute (SVI).

“We are working on a strategic engagement plan, which is in the last phases of being finalized. It would perhaps be done in next few weeks or possibly a month. Once the plan is put into place, it will take Pak-EU relations to the next level,” Amb Nicolae said.

“We are on the right track for developing this relationship,” he further said.

The EU is one of Pakistan’s largest trading partners and the biggest market for Pakistani exports. Moreover, EU and Pakistan enjoy good political and security ties, which were governed by an earlier five year engagement plan. The two sides have been working on adoption of the forthcoming EU-Pakistan Strategic Engagement Plan. The plan is expected to provide a framework for development of broad-based partnership in addition to enhanced economic cooperation in the coming years.

Amb Nicolae said the strategic engagement plan would not be ‘time bound’. The plan would also bring in obligations for both sides in terms of economic reforms, market access, and human rights, the envoy noted.

He said that there was lot of potential for development of ties between Pakistan and EU as a bloc and individually with member countries and that needs to be fully exploited to take these relationships to the desired level.

This is not only the time to calm the situation, but also remove the threats to peace, he maintained.

EU, as a global network, Amb Nicolae said, would not only work for “dialogue between Pakistan and India”, but also for making it as “constructive and open” as possible.

President Strategic Vision Institute Dr Zafar Iqbal Cheema, on this occasion, said Pakistan and the European Union historically good political relations and it was time to translate those into stronger economic and trade ties.