Revisiting 20 Years of Nuclearization of South Asia: Impact on Regional Politics and Security 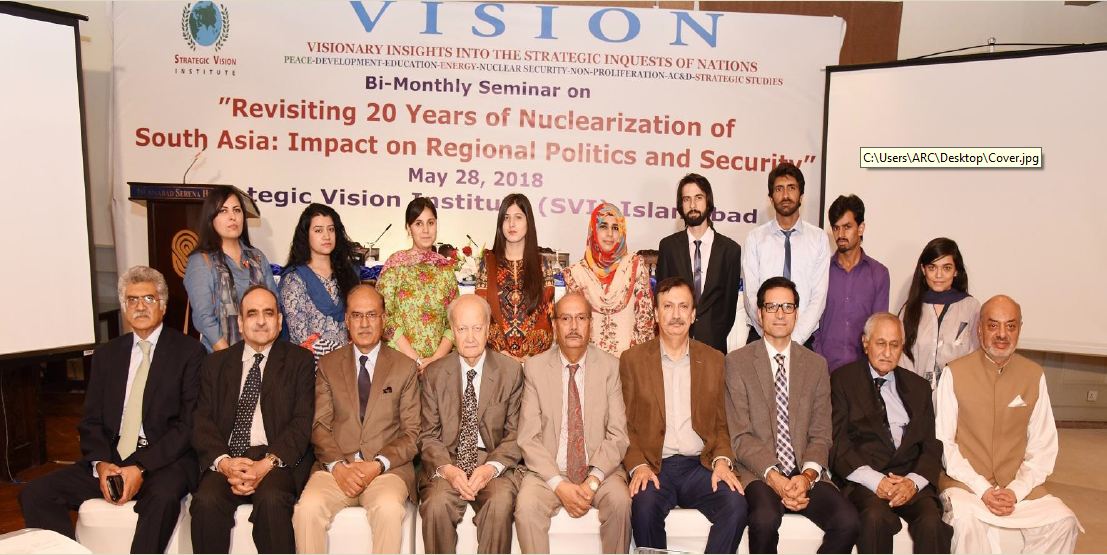 ISLAMABAD, May 28, 2018: Former defense secretary Lt Gen ® Naeem Khalid Lodhi says that the changing nature of conflict in the region is testing the validity of Pakistani belief of having achieved ‘Full Spectrum Deterrence’ through the development of nuclear weapons.

The former defense secretary was speaking at a seminar titled ‘Revisiting 20 Years of Nuclearization of South Asia: Impact on Regional Politics and Security’ that had been organized by Strategic Vision Institute (SVI) to commemorate the May 1998 nuclear tests, which marked the overt nuclearization of the region and irreversibly impacted the security architecture here; the regional and extra regional politics; and the global nuclear order.

SVI, which specializes in non-proliferation issues, believes that the attainment of deterrence equilibrium established ‘cold peace’ in the region and a state of fragile equilibrium that continues to be tested and strained by the developments taking place here. SVI cautions that the strategic environment in South Asia was becoming increasingly complex and unpredictable in the long term due to Indian ambitions of regional hegemony and achieving the great power status.

“We do not have Full Spectrum Deterrence because nuclear parity or mutual deterrence has pushed the war into another zone, which is ongoing and has not been deterred. I can say this is not a full spectrum deterrence unless our spectrum starts from certain level upwards,” Gen Lodhi said while referring to the low intensity conflict and the fifth generation war that have been imposed on Pakistan by external hostile forces and the continuing violations on the Line of Control and Working Boundary by India.

Former ambassador and permanent representative to the United Nations and other international organizations in Geneva Zamir Akram pointed to the instability being caused by US patronage of India and Delhi’s hard line policy on Pakistan.

Pointing to Indian talk about preventive strikes and ‘calling Pakistan’s nuclear bluff’, Amb Akram noted that such “dangerous thinking” could create a “false sense” of being able to do anything. He further emphasized that “with an unstable and unpredictable and mercurial leader like Modi these kinds of policies cannot be discounted”.

Though he agreed that nuclear weapons may not have achieved “full peace”, but prevented a direct Pak-India conflict.

Lt Gen ® Talat Masood maintained that it would be naive to assume that nuclear weapons gave Pakistan “full security”.

He said: “Security comes from economic development, political stability, and social cohesion. Unless a country has all these attributes it would be a great misconception to say that it is strong, stable and cannot be undermined”. He further said nuclear power can be effective once it is backed by other elements of national power.

Former senior Strategic Plans Division official Khalid Banuri argued that nuclear weapons added to Pakistan’s security, but should not be seen as a panacea for all ills. “Other elements of power particularly economic development have to be in consonance with this capability,” he underscored.

President SVI Dr Zafar Iqbal Cheema reminded that Pakistan developed nuclear weapons to deter India from aggression. Therefore, he noted, the strategy remained focused on the military aspect as seen through the development of weapon systems and related technologies.

Dr Cheema said that Pakistan must now seek to exploit the “political and diplomatic prowess” of its nuclear capability and create alliances and secure positions for itself international organizations and regimes.