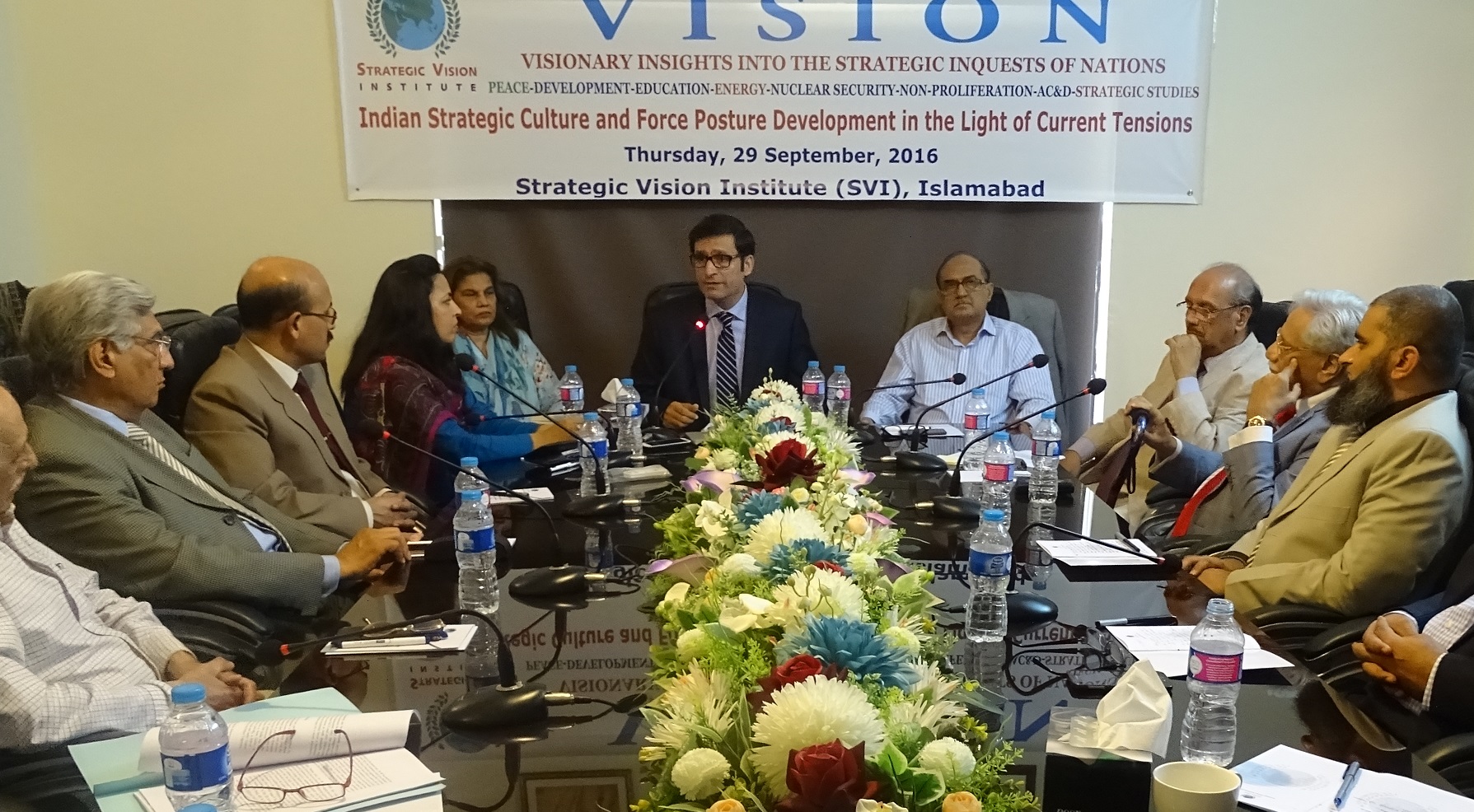 Islamabad – Strategic Vision Institute (SVI) yesterday urged the government to observe ‘strategic patience’ towards India and avoid being drawn into its escalation gambit.

The recommendation from SVI, an Islamabad-based think tank specializing in regional strategic affairs, came at the start of the week during which the government has convened a series of high-level meetings on tension with India in the aftermath of Delhi’s claims of having conducted ‘surgical strikes’ across the Line of Control (LoC).
The recommendations were based on the proceedings of a round table ‘Indian Strategic Culture and Force Posture Development in the Light of the Current Tensions’ organized by SVI, which was attended by representatives of think tanks, scholars, academics and retired military officials.

The SVI was of the opinion that India’s escalatory posture is because of the uprising in Kashmir, which has attracted world attention.
Therefore, the think tank suggested that Pakistan should continue its diplomatic and political support for the freedom movement and highlight Indian excesses in Occupied Valley, which have resulted in deaths of about 110 innocent people and injuries to some 15000 others, 160 of whom have been permanently blinded because of indiscriminate use of pellet guns by Indian security forces.

The think tank observed that India has been avoiding global censure of its brutalities in Occupied Kashmir because of its economic strength.
Therefore, it was advised that the government should bring singular focus to developing world’s positive stakes in Pakistan by improving economy, security and governance.

Former Defence Secretary Lt Gen (Retd) Naeem Khalid Lodhi said surgical strikes, if ever India carries out, would be taken as an act of war and would be accordingly reciprocated.
He believed that Pakistan’s ‘full spectrum deterrence’ capability deters India from undertaking any military misadventure against Pakistan.
“Pakistan has over the past 5-6 years developed a response to Indian cold start doctrine, whose efficacy is proven,” the former top defence official said in a reference to tactical nuclear weapons.
Gen Lodhi said that public pressure, big army/big country syndrome and Modi’s extremist mindset were some of the reasons behind Delhi’s heightened belligerence.
Nuclear expert Dr Adil Sultan contended that the deterrence capability has worked otherwise India would have gone for military option against Pakistan.

Dr Hussain Soherwordi, a professor at University of Peshawar, blamed Pakistan’s poor foreign policy for the problems faced by the country in the region and beyond.

Ambassador (Retd) Fauzia Nasreen said Indian actions were far from that of a responsible state.

President SVI Dr Zafar Iqbal Cheema in his remarks said Pakistan was militarily well equipped to maintain an adequate conventional and nuclear deterrence equilibrium vis-à-vis India or to respond to any hostile action.

He held the view that while Pakistan should not lower its guard against possible aggression by India, the government should devote its energies to making the world more receptive to our narrative and empathetic to the sufferings of Kashmiri people.

Published in The Nation newspaper on 04-Oct-2016

Post Views: 12
Previous PostIndian Strategic Culture and Force Posture Development in the Light of Current Tension on 29th September 2016 Next PostPolitics of NSG and Strategic Stability in South Asia on 23rd August 2016