Process and Structure of Non-Proliferation: NSG and CPPNM 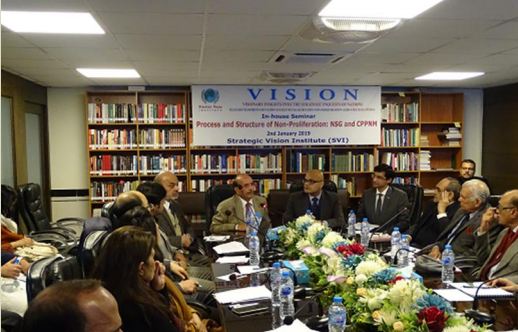 “If criteria is developed and applied across the board for all non-NPT states requiring them to undertake additional non-proliferation obligations, it will enhance credibility of NSG as a rule-based organisation,” Director General Arms Control and Disarmament Affairs at Foreign Office Kamran Akhtar said at a roundtable discussion at Strategic Vision Institute.
Speaking on the topic of “India-Pakistan Membership and Politics of the NSG”, the DG of Disarmament Directorate at the Foreign Office emphasised that any attempt at giving exception to India for entry into NSG would undermine its credibility and it would in that case be seen as a ‘regime driven by commercial and political considerations’.
A stalemate has been persisting at the NSG over the membership for India and Pakistan since the two formally applied for its membership in 2016.

Dr Mansoor Ahmed, a post-doctoral fellow at Harvard University’s Belfer Centre, said that India’s growing fissile material production capabilities would affect the ‘delicate strategic balance in South Asia’ and therefore Pakistan ‘should have a second look at its FMCT (Fissile Material Cut-off Treaty) policy, which is the only way to bring these developments under international spotlight at CD’.
Pakistan’s position so far has been that it would like to see the commencement of negotiations on FMCT after existing stocks are explicitly included in the negotiating mandate.

Dr Ahmed clarified that he was not asking for Pakistan to unilaterally withdraw its reservations on the initiation of negotiations, but to come up with a new approach to draw attention to developments in Indian programme so that the ‘proliferation threat on the horizon could be addressed’.

India, he pointed out, had the largest stockpile of civilian plutonium outside International Atomic Energy Agency safeguards in the world, which can be potentially diverted to military use, and also possesses the biggest reprocessing and enrichment programme.

The scholar warned that the developments indicate that Indians are ‘preparing for nuclear war fighting, escalation dominance, besides achieving compellence during crisis.” He was concerned that Indians are already talking about pre-emptive counterforce strikes; to go for the ‘overkill’ and can also start a ‘limited war against Pakistan’. He also called for raising these issues at NSG.

President SVI Dr Zafar Iqbal Cheema, speaking on this occasion, said that global non-proliferation regime was inherently discriminatory, which was being used by big powers to further their foreign policy goals. He said that Pakistan should only undertake newer commitment on quid pro quo basis rather than committing voluntarily on merits of an issue. “It’s all about give and take for promoting state interest,” he emphasised.

Dr Rizwan Naseer, who is associated with COMSATS Institute, proposed a regional nuclear security process between Pakistan, China, and India on the lines of President Obama’s erstwhile Nuclear Security Summit process for regionally addressing misperceptions and concerns and coming up with confidence building measures.

Dr Naseer said that ratification of Convention on Physical Protection of Nuclear Material by Pakistan on one hand showed the confidence ‘we have in our security regime and on the other sent a clear message to the world about the regard we have for the international non-proliferation regime’.

Previous PostBRI and CPEC: Impacts on Developments in South West Asia Next PostProcess and Structure of Non-Proliferation: NSG and CPPNM on 02 January 2019