Press Release of One Day Seminar on India-Pakistan Impasse &Implication For Regional Diplomacy/Strategic Stability And Three Years of SVI 2013-2015: A Commemoration 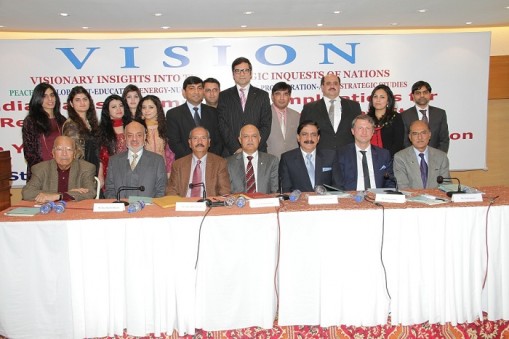 ISLAMABAD: Former defence secretaries want the government to be extra cautious in pursuing a normalisation process with India because they do not see a major shift in Delhi’s policy on its ties with Pakistan.

Speaking at a seminar organised by the Strategic Vision Institute (SVI) on ‘Impasse in Pak-India ties – Implications for Regional Diplomacy and Strategic Stability’, former defence secretary retired Lt Gen Asif Yasin Malik called for “open and extensive” debate within the country on its relations with India.

“There has to be a people-driven national vision, not a government-driven [one],” he added. The seminar was held on the third anniversary of the Islamabad-based think tank which specialises in security and strategic affairs.

Pakistan and India are on the verge of resuming their peace dialogue under the tag of ‘Comprehensive Bilateral Dialogue’. The talks were delayed by the Pathankot attack, but high-level contact between the two countries — which began with a meeting between prime ministers Narendra Modi and Nawaz Sharif on the sidelines of the Paris Climate Summit in November last year, has given the impression of new momentum in bilateral ties.

However, Mr Malik cautioned that no radical shift in ties was expected, although there could be minor improvement caused by expediencies of the international environment.

For Pakistan, “bending is not an option; either forward or backwards. We bend and we get a kick,” Mr Malik, who retired as defence secretary in 2014, said.

He recalled Prime Minister Modi’s belligerent posture towards Pakistan during his election campaign, when he talked about making Pakistan irrelevant in a geo-political context at both the regional and national levels. He said India continued to play “cat and mouse” in ties with Pakistan.

Mr Malik listed a number of measures he expected the government to undertake — both internally and externally — in order to effectively deal with the challenge posed by India: de-linking Pak-Afghan ties from the Pak-India relationship, safeguarding the China Pakistan Economic Corridor (CPEC) from sabotage, tackling political fissures over CPEC, pursuing water security more seriously, and appointing a full-time foreign minister.

Retired Lt Gen Naeem Lodhi, another former defence secretary, echoed Mr Malik when he noted that there was no détente in sight.

In his view, the answer lay in the leadership of both countries ending the “blame game” and approaching the relationship with fresh and open minds.

“The imbalance of size and political clout highly in favour of India begs third party facilitation to veer these two nuclear powers away from confrontational mode. There seems to be no other option,” he said.

The director of Quaid-i-Azam University School of Politics and International Relations, Dr Zafar Nawaz Jaspal, suggested that the countries’ leaders “act ratio­nally and thwart the agenda of radicalised transnational terrorist groups for the prosperity of their people”.

He warned that “limited war between India and Pakistan could escalate to full scale nuclear war”.

SVI president Dr Zafar Iqbal Cheema said the biggest obstacle to normalisation with India were its designs for hegemony and dominance.

He believed that India was dragging its feet when it came to meaningful negotiations with Pakistan, in a forlorn hope that Pakistan would not be able to sustain itself in the process.

Previous PostCall For Papers Next PostThree Years of SVI Report: 2013-2015