“Kashmir Day: Solidarity with the People of Jammu & Kashmir” 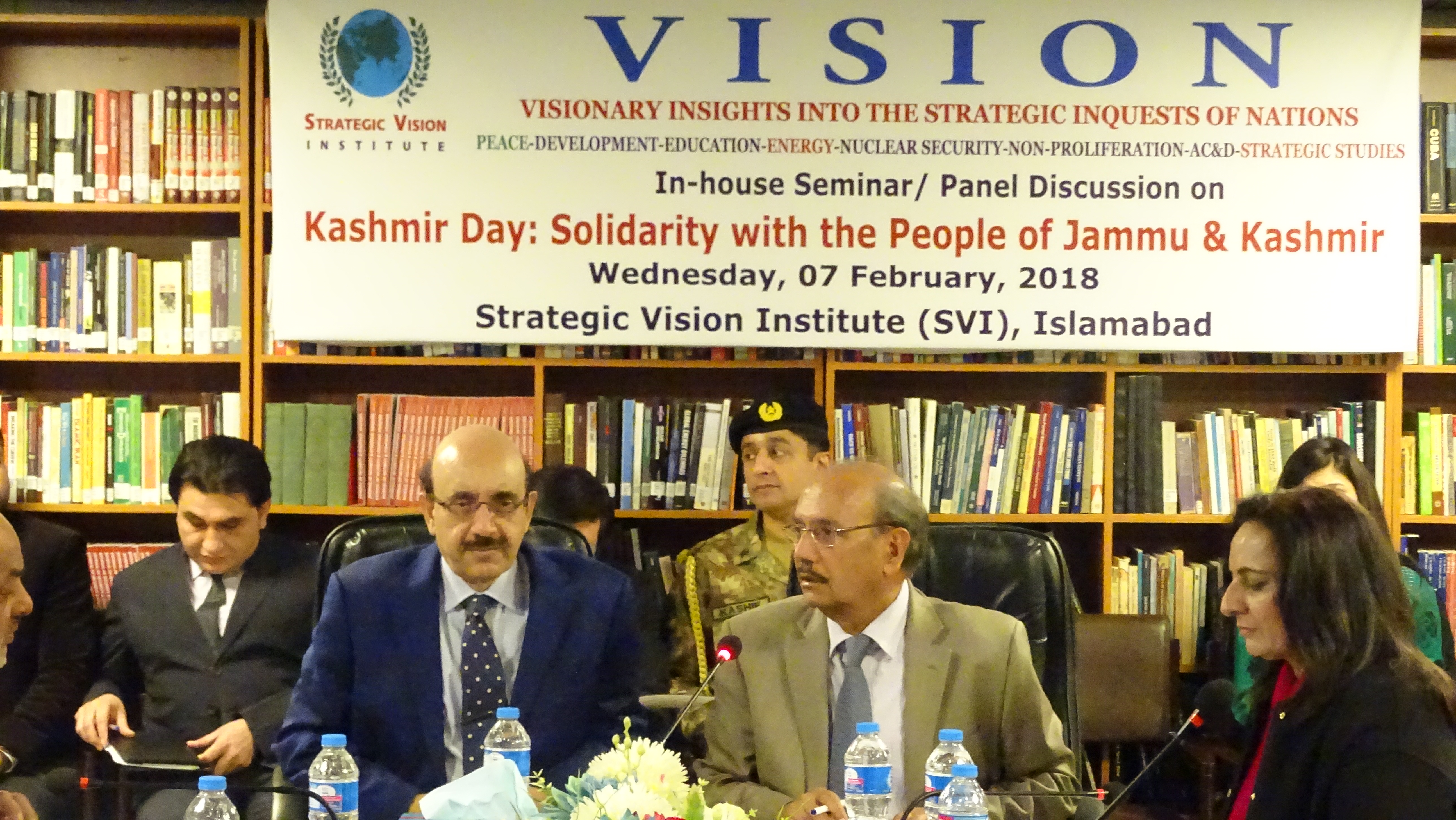 Bilateral talks with India were a hoax: AJK President

ISLAMABAD, February 7 2018: President of Azad Jammu and Kashmir Sardar Masood Khan on Wednesday called for forcefully raising the Kashmir dispute at United Nations and other international fora and reminded that bilateral talks between India and Pakistan failed to progress on the issue.

AJK president was speaking at a seminar at Strategic Vision Institute (SVI), an Islamabad based think tank. The topic of the seminar was ‘Kashmir Day: Solidarity with the People of Jammu & Kashmir’.

“Bilateral talks have been a hoax and we should go back to the international community,” he said.

President Masood, expressing his frustration over Pak-India bilateral dialogue that has had several starts and stops and is currently on hold for years, said “bilateral talks with India have been a hoax because this was a charade devised to reduce the importance of Jammu and Kashmir dispute in the overall bilateral agenda.”

Kashmir, he recalled, was once the top most issue on Pak-India bilateral agenda, but has now been reduced to a minor fraction of the agenda.

President Masood said Indian government’s policy on Kashmir dispute is to inflict unbearable punishment on Kashmiris, not to engage Kashmir’s Hurriyat leadership on political issues, and eliminate Kashmir from bilateral agenda with Pakistan.

He proposed that the matter should be taken up with renewed “vigor, conviction, and consistence” with UN Security Council, UN General Assembly, UN Human Rights Council, EU Parliament, British Parliament and US Congress.

UN Secretary General António Guterres, President Masood said, should be asked to categorically offer his good offices for resolution of Kashmir dispute instead of “artificially balancing” his statements between Pakistan and India.

The UNSG, he maintained, should under Chapter VI of UN Charter invoke mediation or arbitration and put together a group of eminent personalities or leading nations. In this way, he believed, a process on Kashmir could be started.

AJK president believed that a diplomatic blitz was very much possible because of the Pakistani diaspora, whose influence is increasing. “We must leverage the strengths of our diaspora,” he underscored.

He also emphasized on improving “communications” especially with the outside world and politically and economically strengthening Pakistan.

Executive Director SVI Dr Zafar Iqbal Cheema recalled the atrocities being perpetrated by Indian occupation forces in Occupied Kashmir and said Pakistan’s support has been resolute. He said Kashmir is not just a dispute over land, but is in effect a violation of people’s fundamental right of self-determination.

Dr Cheema said Pakistan should assess whether the level of diplomatic and political support being extended to the Kashmiris fighting Indian oppression was enough and how it could be improved to help the people of the Occupied Valley achieve their goal of freedom.