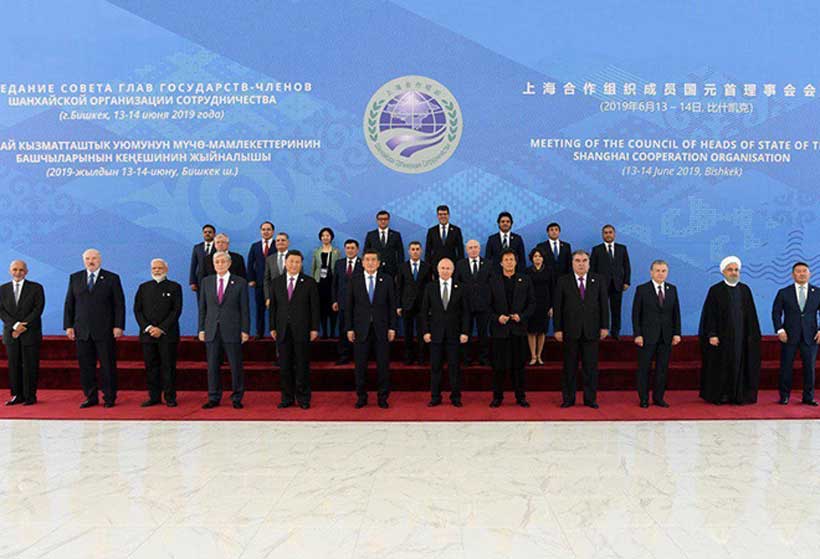 Bilaterally botched relationship, Pakistan and India would be working together in an economic and strategic multilateral forum of Eurasia’s Shanghai Cooperation Organization (SCO). The China-led Organization has eight members – India, Kazakhstan, China, Kyrgyzstan, Pakistan, Russia, Tajikistan and Uzbekistan – and four observer states, Afghanistan, Belarus, Iran and Mongolia. Both India and Pakistan were given the membership in 2017.

Founded on June 15, 2001, the SCO characterizes the inter-governmental interaction to provide an institutional platform for broad regional economic cooperation within the context of the new realities of globalization and regional integration. As such the interlacing of relations between countries and regions is significantly augmented with the paradigm shift of increasing interdependency and commonly accessible communication. The major objective is to encourage a more cohesive global community for development and prosperity.

However, locked in unrelenting hostility, to establish a non‐securitized culture with collective security through conflict resolution between India and Pakistan is blocked by their parochial politics. The teaming up when encountering transnational challenges, as members of a multilateral forum, such as the SCO, presents a ray of hope despite the antiquated politics of Indo-Pak relations.  Nationalism and politics of ‘otherness’ or populism has mainly kept the basic conflict dynamics unchanged between India and Pakistan so far. It is painfully being exacerbated even further with Modi’s Hindutva ideology.

Similarly, one of the characteristics of regional cooperation is strengthening conflict management to ensure security. The Composite Dialogue initiated between the two states, way back in 1998, with reference to “all outstanding issues including Jammu and Kashmir” never reached its conclusion. A brief rethought of holding the “Comprehensive Bilateral Dialogue’ in 2015, also got scuttled by ever soaring tensions.

Likewise, geo‐economic collaboration in the region, with autonomy for individual countries is dependent upon its political and security conditions. The South Asian Association for Regional Cooperation (SAARC) is perhaps the only regional forum which has not been able to provide a much needed platform for discussing security‐related issues.

Hence the question whether Prime Minister Imran Khan will attend the SCO summit when India would host the event in October this year, is one of extreme consternation for Pakistan against the backdrop of the deteriorating bilateral relations between both countries. Especially since India has revoked Article 370, keeping the Kashmiris under siege for more than 150 days, an emboldened Modi’s recent Bill on Citizenship, and the erstwhile incident of February27 when Pakistan’s borders were violated, with its opposing hostile narratives all present an ‘incandescent panoply’ of South Asia’s collective security concerns. Already deep rooted and agonizing for the people of both India and Pakistan, the territorial disputes between both countries have significantly stampeded the possibility of cordial bilateral relations between both neighbors.

Mr. Raveesh Kumar, the spokesman for India’s Ministry of External Affairs has already declared that “India will be hosting the heads of government summit later this year. As per established practice and procedure within SCO, all eight members, as well as four observer states and other international dialogue partners, will be invited.”

South Asia is desperately negotiating its place in an arena of global interconnections within the throes of rapid change. Within the purview of both immediate and distant history where relentless confrontation between two major nuclear armed nations has played a defining role, how would one geographical unit benefit from a multilateral venture? Where would India and Pakistan start as co‐members of the SCO, in the absence of the complementarity of political interests? Who would step forward to challenge the prevailing incongruity both internally and externally? To borrow from the Theory of Transcendence for conflict resolution, proposed by Johan Galtung, India and Pakistan have the following three options to respond to the changing world of multi‐ polarity and regional integration:

1. To give up in advance on the outstanding issues,

3. Or reach some compromise.

Hence, would their presence in the SCO this year impart a new momentum towards a more coherent and effective exercise in conflict management? Is it an opportunity? Or would it deepen their already existing strains and widen their ancient rivalries further afield to Afghanistan and Central Asia?

Through the SCO, China and Russia are building a decidedly multi‐polar “Eurasian” point of view. Its strategic aims are to condemn any efforts to achieve a “monopoly in world affairs”, divide the world into “leaders and followers” and “impose models of social development.” This obviously reflects China’s insistence on “multi‐polar” world as against the US persistence of “uni‐polar” international order.

Agreeably, the SCO does provide an opportunity to both India and Pakistan to transcend from their parochial politics. It has historically provided a platform to its member states to sign such crucial agreements like the Treaty on Deepening Military Trust in Border Regions and the Treaty of Good‐ Neighborliness and Friendly Cooperation, amongst its member states. The transformation of the regional and global security paradigm amidst the growth of new economic centers also necessitates a qualitative change. The world looks askance at teamwork.

Though the forum is too feeble to bear the consequent shocks of Indo-Pak hostility, the converging interests of the member states offer an opening for an effective intermediary role to resolve the Kashmir issue as well. The presence of unimplemented resolutions in the United Nations and now universally noticeable human rights violations has already given it an international status.

Conclusively, a final decision on whether Prime Minister Imran Khan attends the meeting, scheduled for October, is yet to be made by Islamabad. Placing cooperation above conflict in the conduct of interstate relations is certainly a viable solution however, without compromising on its principled stance. As an alternative there is already is a precedent from the past to have the foreign ministers representing the national interests in such multilateral forums should the Prime Minister choose to abstain.