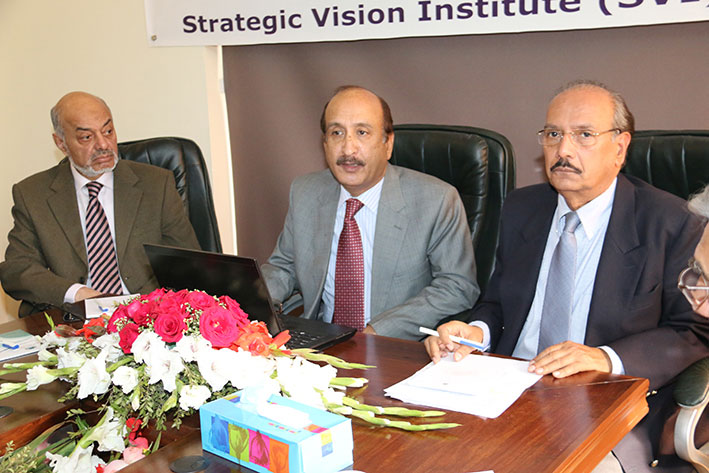 An In-house Seminar was organized by the Strategic Vision Institute Islamabad on the subject “An overview of the Nuclear Safety Regime in Pakistan” on March 13, 2015. President SVI, Dr. Zafar Iqbal Cheema, welcomed the Guest 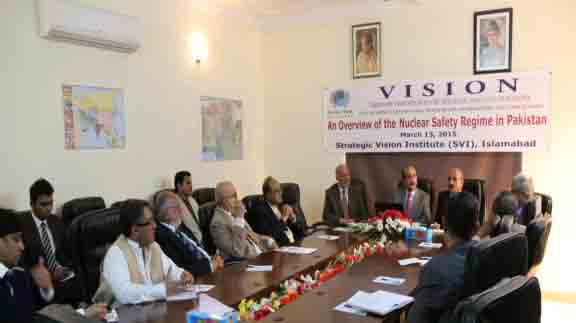 Speaker and the audience while chairing the session. Introducing the subject of the Seminar, Dr. Cheema said that “Nuclear Security and Safety Regimes have become highly significant variables in the contemporary debate on Nuclear Non-Proliferation, Arms Control, and Disarmament”. He regretted that in the prevailing political scenario, it made little difference as to who was right or wrong but what mattered more was who was allied with or against whom. He continued that despite Pakistan’s history of maintaining one of the highest standards of nuclear safety and security, it remained in the eye of the storm in the US and the Western press on the issue of the security of its nuclear assets. 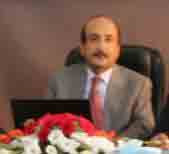 The Guest Speaker, Mr. Zaheer Ayub Baig, Director General (corp.) Pakistan Nuclear Regulatory Authority (PNRA), shed light on the executive and regulatory authority of PNRA. He described the historical background of Pakistan’s nuclear security regime as how the creation of Pakistan Nuclear Safety Committee in 1964 led to the creation of Pakistan Nuclear Regulatory Board (PNRB) and establishment of Pakistan Nuclear Regulatory Authority (PNRA) in 1994 and 2001 respectively. He further elaborated the composition of PNRA, which is comprised of seven members, and its functions, rules and regulations, and responsibilities. He added that the PNRA is also responsible to grant licenses, inspection of nuclear and radiation facilities, and assurance of emergency preparedness plans to ensure the physical protection of nuclear installations, radiation materials and environmental monitoring activities. In this regard, he described that the Nuclear power plants, nuclear research reactors, nuclear medical centers, agriculture research centers, industrial radiography and manufacturers of nuclear safety class equipments and components are required to get license from PNRA after appropriate inspection. He assured the audience about the defense of Pakistan’s nuclear reactors by highlighting the various security barriers for the reactors under the nuclear plant security zones established by the PNRA. He also delineated the PNRA legal system that is constituted under the PNRA ordinance, regulations, and guides. The

site registration, construction license, permission to introduce nuclear fuel, and operating license are also the part of PNRA legal system. Besides this, PNRA also maintains regulatory oversight process. He added that the mission of PNRA is the safe operation of nuclear facilities.
Discussing the International activities of PNRA, he told that the PNRA professionals participate as resource persons in training courses, workshops, conferences and seminars at international levels. He added that the PNRA also participates in assessment of regulatory infrastructure of countries, embarking on nuclear power program, through International Atomic Energy Agency (IAEA) review missions. He informed that for the purpose of capacity building in nuclear safety and security, National institute of Safety & Security has also been established with the objective to produce professionals, technicians, and managers skilled in nuclear and radiation safety & security. The training areas of National Institute of Safety & Security include Regulatory Control, Nuclear Safety, Radiation Safety, Waste and Transport Safety.

In the Q&A session, the participants of the seminar appreciated the endeavor of SVI in arranging the seminar at such a critical time when Pakistan is facing numerous hurdles in the establishment of K-2, K-3 nuclear power plants. 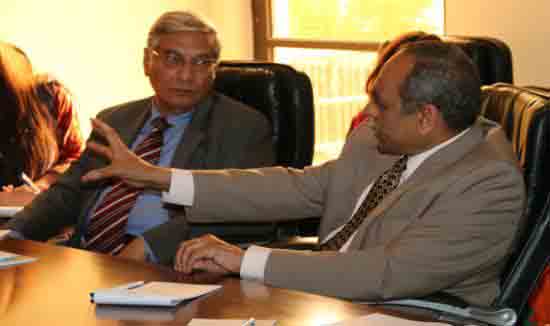 In response to the questions about the site and security issues of K-2, K-3 nuclear power plants, the DG PNRA was confident in Pakistan’s capacity in handling its power plants. He said that “Indeed, Pakistan has the best record in the quality assurance of its nuclear power plants”. He added that Although, PNRA has done its best to avoid radiation hazards to the citizens of Pakistan as K-2, K-3 power plants building would be able to withstand the crash of any commercial plant but PNRA has also signed a Memorandum of Understanding (MoU) with Karachi Capital Authority (KCA) to discourage the future population settlements in the safety zone of these plants. Furthermore, the design of the plants is fully able to withstand the earthquakes of scale 9.00, which are recorded at maximum 8.00 at rector scale in that area. In addition, PNRA possesses highly technical people and mobile radiation detection vehicles to cope up with any kind of uncertainty. The participant of the seminar recommended that the PNRA should also start a wide-scale public awareness program to establish these plants, re-assuring the belief of the citizens of Pakistan in the performance of the PNRA, and to tackle the agenda of anti-Pakistan lobby.
At the end of the seminar, Dr. Zafar Iqbal Cheema, President /Executive Director Strategic Vision Institute (SVI), thanked the honorable Guest Speaker and the participants for finding their time to be the part of this seminar and appreciated their spirit to work for the national interest of Pakistan. He concluded the seminar by stating that the capacity of Pakistan in continuing the epoch-making performance about handling its nuclear power plants effectively.
The Seminar gained great attention from all over the Pakistan and was covered by the prominent media houses in Pakistan; i.e. The Nation, Dawn, The News, Daily Times, and Pakistan Observer.