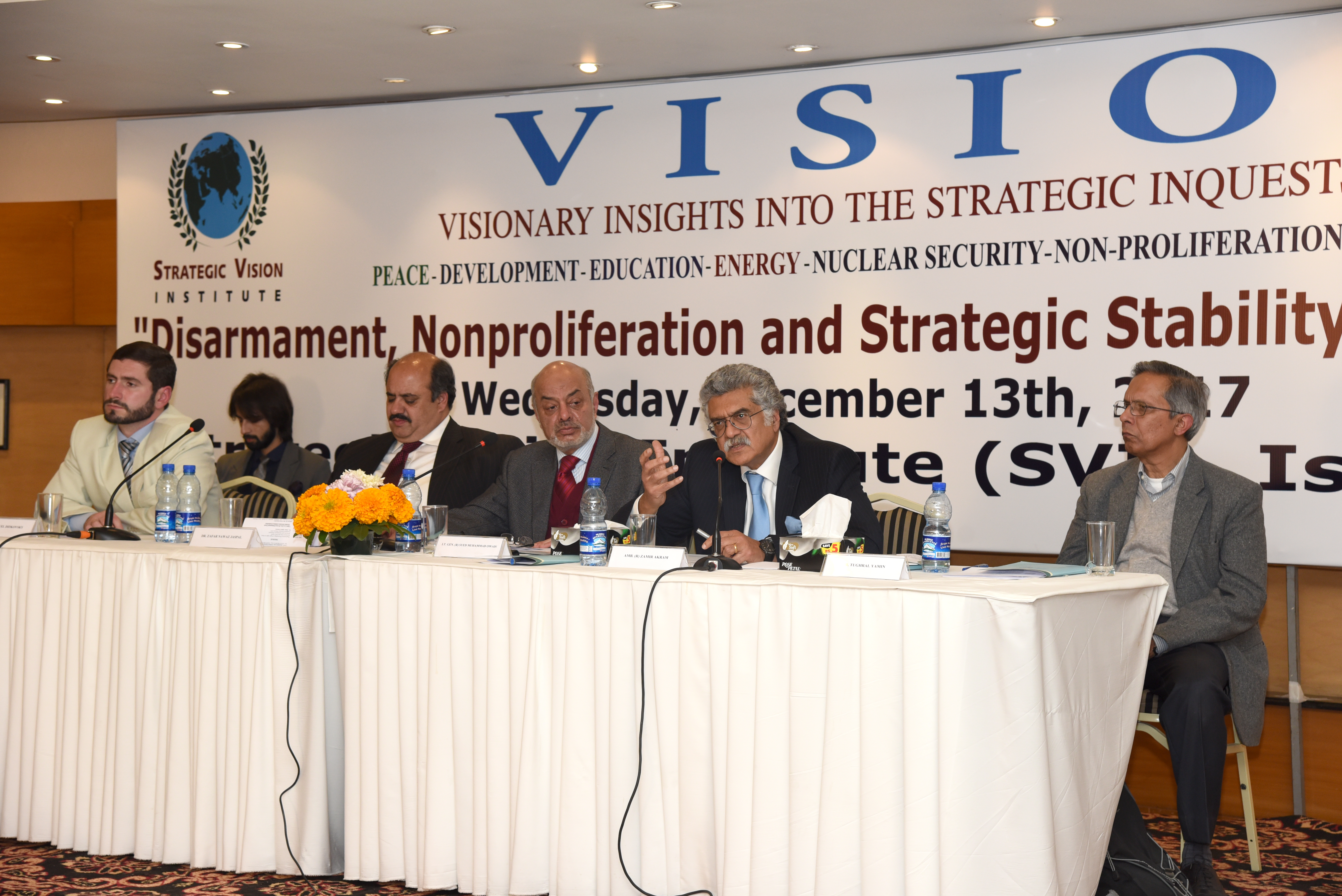 Ambassador Akram, a noted non-proliferation expert, was speaking at a seminar on ‘Disarmament, Non-Proliferation and Strategic Stability’ that had been organized by Strategic Vision Institute (SVI), an Islamabad based think tank specializing in strategic issues,said a press release issued Friday.

He underscored that stability and deterrence were shifting in the region because of India’s acquisition of triad of delivery systems, the region’s political dynamics, uncertain situation in Afghanistan and Indian hostilities at the Line of Control and its sub-conventional war against Pakistan through Afghanistan based proxies and terrorist groups.

“But still we are ready for dialogue and more confidence building measures to stabilize the situation,” he emphasized.

Former Defense Production Secretary Lt Gen ® Syed Muhammad Owais agreed that regional stability was being disturbed by India. He said India was being encouraged in its weapons buildup by United States, whose government’s “erratic and incendiary” policies were destabilizing the world at large.

Dr Zafar Jaspal, a professor at Quaid-e-Azam University, maintained that arms race was underway in the region and prospects of arms control were dim. He said the arms race was being sustained through West’s patronage of India, which had accepted it in multilateral export control regimes like Missile Technology Control Regime (MTCR) and more recently Wassenaar Arrangement on Export Controls for Conventional Arms and Dual-Use Goods and Technologies. India, he noted, additionally enjoys a waiver at the Nuclear Suppliers Group. This, he contended, was helping India amass weapons.

Dr Tughral Yamin, who is associated with NUST’s Department of Peace and Conflict Studies as its associate dean, said that besides the weapon systems, leadership of the countries also had an important bearing on strategic stability.

Pavel Didkovsky, First Secretary at Russian Embassy, underlined the possibility of a criteria based approach for inclusion of non-NPT states in Nuclear Suppliers Group (NSG). He said Russia along with China and others were working for a formula that could be acceptable to all.

Didkovsky said Russia was not opposed to Pakistan’s NSG candidature and had no intension to block it. He praised steps taken by Pakistan for strengthening its national export control program that complied with the spirit of international regimes and conventions. He also acknowledged the efforts undertaken by Pakistan for stability in the region including unilateral moratorium on nuclear testing and its support for Russian position on prevention of arms race in outer space.

President SVI Dr Zafar Iqbal Cheema said the arms race in the region was being led by India, which has great power aspirations. India, he said, acquired nuclear submarines, anti-ballistic missile shield, cruise missile and other destabilizing weapon systems, compelling Pakistan to come up with responses out of its security imperatives.

He pointed towards Indian unwillingness to enter into a regional or bilateral arrangement with Pakistan to curb the arms race.