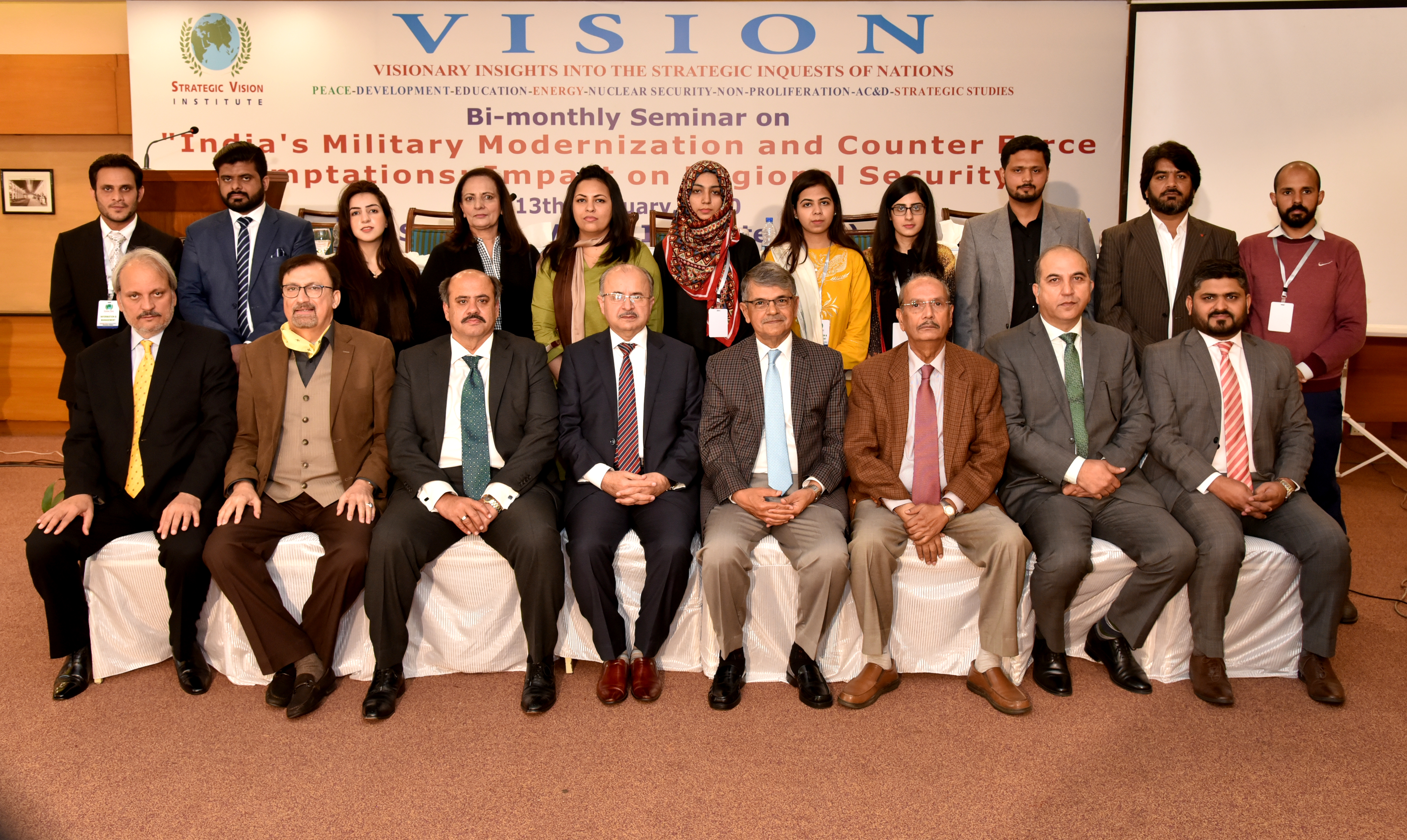 He was speaking at seminar organized by Strategic Vision Institute (SVI) on ‘India’s Military Modernization and Counter-Force Temptations: Impact on Regional Security’.

While proposing an offensive approach as the best guarantee for maintaining deterrence against India, he said Pakistan would, in view of geo-political environment, have to depend on China for acquisition of platforms and weapon systems. He noted that the two key issues in this regard would be the availability of finances for the military purchases from China and Beijing’s readiness to provide leading technology.

The former air chief also called for developing electronic countermeasure capability to counter India’s S400 systems, acquired from Russia, and focusing on cyber warfare. The cyber warfare capability, he emphasized, would have to be developed indigenously.

Former Secretary Defense Production Lt Gen (R) Syed Muhamamd Owais also recommended closer coordination with the Chinese to remain prepared for responding to any hostility from India. India, he maintained, wants to weaken Pakistan politically, militarily, economically, and internally and this hostile posture is unlikely to change irrespective of who is in power in Delhi.

India in its quest for modernization of its forces, Gen Owais said, is supported by US and Israel. Delhi is, moreover, putting in more resources for acquisition of modern weapon systems.

Air Vice Marshal (R) Faaiz Amir, former vice chancellor Air University, while talking about the prospects of a disarming strike by India against Pakistan nuclear arsenal, said that in the near to medium term there were no chances of such a strike being successful. However, with India acquiring capabilities in weapon accuracy and sensors, this assessment may change, he cautioned.

“India by enhancing its counter-force capabilities would trigger arms race and perpetuate other dynamics that could aggravate political and military conditions,” he further warned adding that Delhi’s overconfidence could lead it to believe that it can execute a disarming strike, which would place the region and the world in an incredibly perilous position.

Dr Adil Sultan, director CASS, noted that India was developing capabilities that could provide it an option of pre-emptive counter-force strike against Pakistan.

“Any attempt to neutralize or undermine Pakistan’s deterrence potential to explore space for limited conventional conflict is likely to trigger a response that would eventually end in a nuclear holocaust,” he said.

He too looked skeptical about India carrying out a successful counter-force strike against Pakistan because of lacking intelligence, surveillance, and reconnaissance (ISR) capabilities and precision weapons. However, he said that development of counter-force capabilities by India would pose challenge for Pakistan’s nuclear deterrence.

“Pakistan’s timely responses and development of sophisticated military technology, like intermediate and short-range ballistic missiles, MIRVs, air, and sea-launched cruise missiles, and development of naval second strike capability have been effective in preserving the minimum credible deterrence,” he observed.

Dr Cheema said that an unfortunate aspect of South Asian Nuclearization was the pro-India bias of the international community.

Post Views: 9
Previous PostEmerging Cyber warfare threats to Pakistan Next PostSri Lanka A Key Piece In The Great Game Of The Indian Ocean