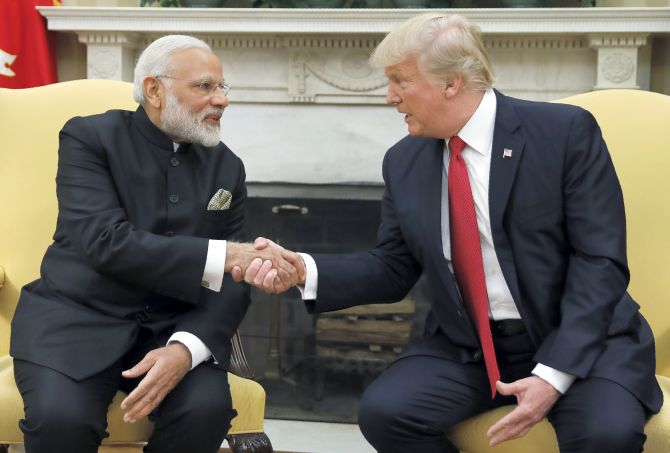 Rearrangements of new realities after the withdrawal of the Soviet Union from Afghanistan in 1979, and the readjustment of post WWII International Order into a multi-polar regionalized and globalized world, has led to the twosome power game in South Asia to continue via proxy. In all, from the legacy of 9/11 to the unsubstantiated accusations of ‘terrorist proxies,’ having safe havens for the Haqqani and the Taliban, Pakistan remains in a tender predicament despite being the ‘most allied non-NATO ally’ of the US. The role of a frontline state for the US was played unfailingly by Pakistan both during and after the-Cold War by joining anti-communist alliances like CENTO and SEATO and in the War on Terror (WoT) respectively. Pakistan was also a strategic ally to the CIA and facilitated its biggest covert operation against Soviet forces in Afghanistan. It helped the US provide billions of dollars in weapons to the Afghan Mujahideen. Till then, India was on the opposite side of the fence as it pursued a pro-Soviet policy.

Amidst the rise of a multi-polar politico-economy in a more regionalized and globalized world, India has successfully attracted its economic and diplomatic successes into new international opportunities. As such, shifting its romance towards the US after the Soviet Union was more lucrative to its politico-strategic clash with Pakistan.

In fact, India was already a better choice for the US. It had its comprehensive industrial base with 10% economic growth rate in early 1990’s, at the time of the breakup of the Soviet Union. The policy of self-reliance pursued uninterruptedly by India ever since its independence also adhered well in an increasingly more integrated international financial system despite new political dynamics. Its geo-strategic location next to the emerging US new competitor, China, embodied better transactional value.  The $400 billion Foreign Exchange Reserves, 7.4 percent economic growth rate almost equal to China and an earnings of about $30 billion from Foreign Direct Investment provide a solid base much in contrast to Pakistan’s import and aid driven economy.

Pakistan, on the other hand, had to largely compromise on its national interests by looking for bailout packages from the International Monetary Funds and International donors with its political status already weak as the mutual mistrust between the US and Pakistan had reached to new heights. To find a space in such an international politico-economic rivalry was an uphill task for Pakistan.

Hence, Senior US diplomat Alice Wells’ renewed criticism on the China-Pakistan Economic Corridor (CPEC), during her visit in January, 2020, is a realistic tilt towards India. Evidently, the US allying itself with India more than Pakistan is more useful for the US and should be understandable. Her vehement criticism on the flagship projects of China’s Belt and Road Initiative (BRI) in repetition of her earlier remarks at the Wilson Centre in Washington on Nov 21, 2019, represents simply politics of pragmatism and interest.  Similarly, the alleging lack of transparency in CPEC projects and the claims that Pakistan’s debt burden was growing due to the Chinese financing is an argument in the same vein. Amb. Wells went even further to declare that the companies blacklisted by the World Bank got contracts in the CPEC and had opposed the debt sequence as well. She also suggested that by getting Chinese financing for the projects, Pakistan was buying expensive loans which would eventually take a heavy toll on its already struggling economy.

Pakistan’s Foreign Minister, Shah Mahmood Quraishi’s talk about human rights abuses by the Indian troops in the occupied Kashmir and intensified LoC ceasefire violations, assurances of Pakistan’s resolve for peace and stability in Afghanistan, was more of a diplomatic struggle to gain a strategic and political space in already strained relations and amidst a growing Indo-US nexus. The US already considers India a ‘major defence partner’ to facilitate defence technology, combat exercises and wargames. Joint projects have already been designed to include aircraft carrier technologies and jet engines, futuristic helicopters, infantry combat vehicles, F-16/ F-18 fighter production line and billions of dollars’ worth of arms deals including the C-17 Globemaster, Poseidon-8, C-130 Super Hercules, Apache attack helicopters and Chinook heavy lift helicopters. Pakistan, on the other hand, has been denied for creating a strategic imbalance in the nuclear South Asian region ever since the Obama presidency.

The times of Donald Trump are no different with his new syndrome of Islamophobia. Though, Trump praised Pakistan’s role in War on Terror and in Afghanistan during his several rounds of meetings with Prime Minister Imran Khan, his earlier declaration of Pakistan as the most dangerous country after Iran and the relations promoted between India and the US by four successive presidents prove enough evidence on the convergence of their interests. Pakistan has almost lost grounds to India. India holds a significant place in the American strategy to contain China also.  Their policy of strengthening India’s conventional forces is growing with every passing regime. The statement of Alice Wells should therefore be seen in the light of the Mike Pompeo’s (the US Secretary of State) earlier warning to the International Monetary Fund (IMF). He said that the Trump administration will not allow it to lend US dollars to Pakistan for repaying China. The looming threat of placing Pakistan on the FATF blacklist should also be taken as yet another arm twister with the same aim.

Based on this insensitivity, arrantly ignoring Pakistan’s legitimate security and economic concerns is certainly a blow for a country which had suffered immense material damages amounting to over $120 billion during the US War on Terror as a frontline ally. Hence, as is, can Pakistan rely on such passive diplomacy?

Understandably, the onus of understanding this dilemma in their relations lies more on the US. It can be safely held responsible for changing the balance of power in South Asia with its consolidated political, strategic, monetary and military union with India. Its apathy towards the strategic balance in the region with three nuclear powers; China, India and Pakistan, along with the Afghan quagmire cannot be ignored. Neither does it absolve Pakistan for keeping all its eggs in one basket. Notwithstanding the fact, Pakistan remains a state of crucial relevance to the region. To revitalize its role, Pakistan needs to look beyond the $5.5% projected GDP for 2020s as a catalyst towards regionalism of South Asia and bring its house in order. Remarks of Daniel S. Markey of the Council on Foreign Relations (CFR), that, it “is anything but clear. A clean break between Pakistan and the US seems unlikely, despite simmering disagreements over a number of issues”[1] cannot be ignored either.

Post Views: 61
Previous PostSri Lanka A Key Piece In The Great Game Of The Indian Ocean Next PostEscalating to De-Escalate: From Balakot to Ain al-Asad