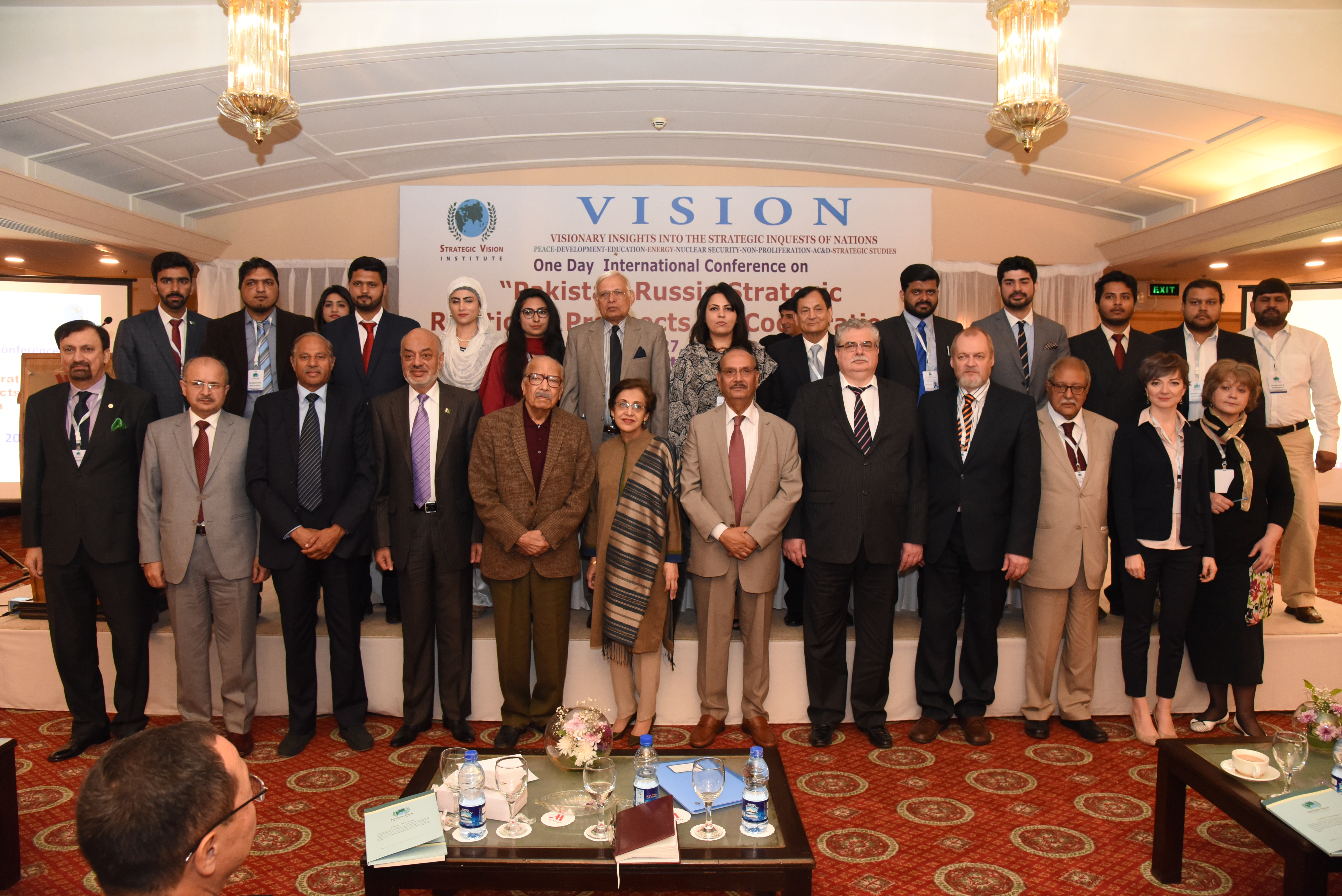 They were speaking at an International Conference on Pakistan – Russia Strategic Relations: Prospects for Cooperation, which was held under the auspices of Strategic Vision Institute (SVI), an Islamabad based think tank. Besides, Ms Janjua and Mr Dedov the conference was addressed by a number of local and Russian speakers.

The Conference had been organized by SVI to explore the prospects of expansion in Pak-Russia relations in view of the changing regional and international geo-political environment, warming economic ties between the two countries, and their growing bilateral military cooperation.

Foreign Secretary Tehmina Janjua said Pakistan and Russia were having an “emerging partnership” which had “tremendous scope”. She said the growth in relations was underpinned by progressive institutional relations, summit level exchanges, military to military ties, and strategic cooperation for peace in Afghanistan.

She praised Russian role in de-escalating the recent Indo-Pak crisis and its offer for mediation between Pakistan and India.

The foreign secretary saw “a change in the configuration of Pak-Russia relations” from Moscow’s “nuanced policy towards South Asia”. Russia’s policy for peace and stability in the region was balanced, she maintained.

Both Secretary Janjua and Russian Ambassador Mr Alexey Dedov mentioned the upcoming high level engagement between the two countries in Kyrgyzstan in June later this year on the sidelines of Shanghai Cooperation Organization (SCO) Summit.

Mr Dedov said that Pakistan’s membership of SCO advanced the potential of cooperation between the two countries.

Mentioning the institutional processes between the two countries, he said the high level political dialogue was contributing to the growth of ties, whereas economic cooperation was being driven by Inter-Governmental Commission on Trade, Economic, Scientific and Technical Cooperation. A meeting of the commission is planned for the last quarter of this year, he said.

The envoy said that energy was the mainstay of Russia’s economic cooperation with Pakistan and gave an overview of the developments related to the North – South Gas pipeline. He said that Russia had after the signing of inter-governmental agreement in 2015 completed its internal procedures and was waiting for Pakistani partners to complete similar measures on their side. “We are now at the stage of agreement from the implementing agency,” he said.

President Strategic Vision Institute Dr Zafar Iqbal Cheema in his presentation noted the progress made by Pakistan and Russia in their diplomatic and political relations; cooperation for peace in Afghanistan; military ties and the strategic stability dialogue.

Dr Cheema said that the two countries have been negotiating military hardware sale for few years, but have made little headway so far. He said close relations between Moscow and Delhi, $5.0 bn S-400 missile system deal and 10-year lease agreement for a new Russian SSN (nuclear-powered general-purpose attack submarine) were concerning for Pakistan.

Dr Cheema said that although there was strong desire among leaders of both countries to take the ties forward, but it remained to be seen how much room for progress was actually available.

Dr Irina Serenko from Institute of Oriental Studies at Moscow’s Russian Academy of Sciences said Russia considers Pakistan as one of the major countries for the realization of in its vision of Euro-Asian Cooperation. She said regional cooperation demands improvement in regional security situation in South Asia.

Dr Yulia Sveshnikova from Moscow based Center for Political Studies of Russia emphasized greater conversation between Islamabad and Moscow for expanding the relations. She said there was “fear of unknown” in Moscow and because of the history of relations, the two sides needed to know more about each other.

Amb ® Arif Kamal observed that Russia was exploring prospects of growth in relations with Pakistan, while keeping India engaged. He was of the opinion that policymakers in Moscow remained indecisive and vulnerable to internal debates on how and to what extent they can pursue this relationship. Meanwhile, in his view, Pakistani leaders saw Russian engagement as a dissuasive factor vis-à-vis Indian aggressive designs.

Vice Chancellor Air University AVM ® Faiz Amir foresaw an imminent change in regional order and called for greater regional cooperation and establishment of a non-confrontational order. On Pak-Russia relations, he believed, more needed to be done to move ties beyond military cooperation and arms sales.